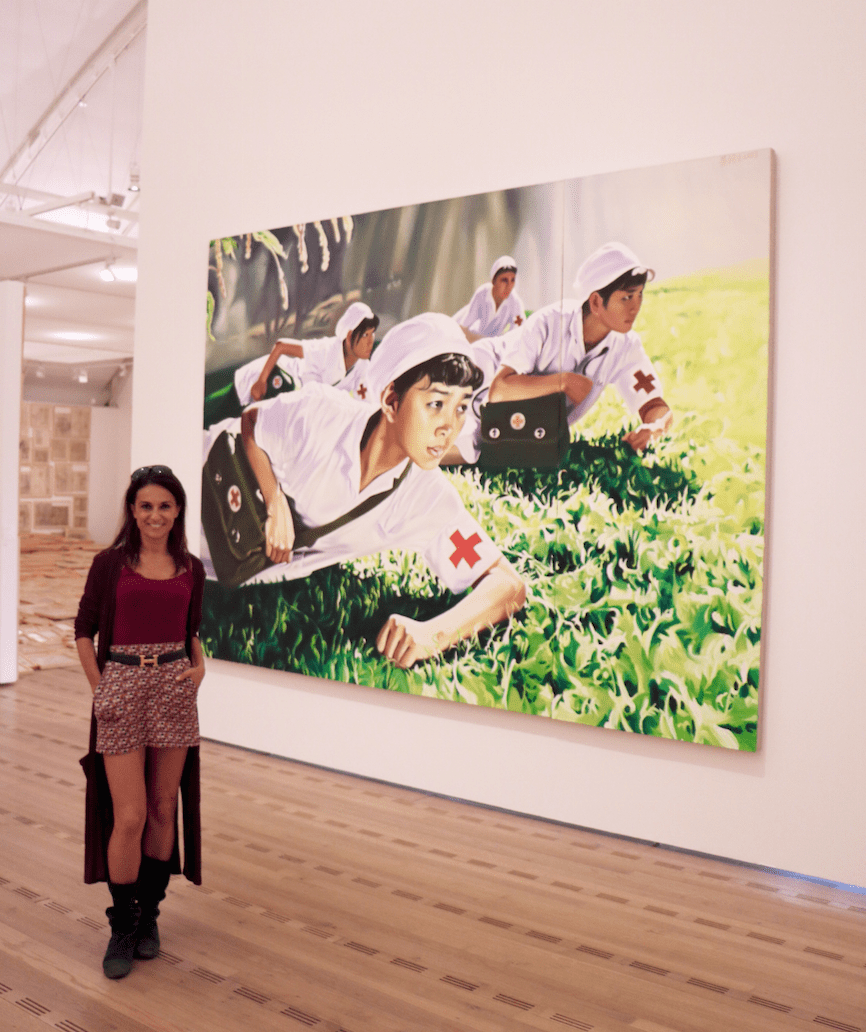 Get ready for strong emotions: if you visit the Paul Klee Centre in Bern these days (and the beautiful museum itself, designed by Italian architect Renzo Piano, is already worth the trip), you’ll see a very intense exhibition about contemporary China, called Chinese Whispers. You know that game we all did when we were children, of whispering something in someone else’s ear, and that person would whisper to someone else until the final word would change completely? The title is a metaphor for China today – a mystery, a distorted truth, and a beautiful whisper. Beautiful architecture melting with the surrounding nature: the Paul Klee Centre in Bern. Top and cardigan by Comma Fashion. Whisper in someone else’s ears, like when you were a kid. Photo: zpk.com

The man behind the exhibition is Uli Sigg, a Swiss businessman and diplomat who is the largest private collector of contemporary Chinese art in the world. I met him during a private tour of the exhibition, when he explained some of the artworks – I was impressed by how well he knew every single one of them. Mr. Sigg served as the Swiss Ambassador to China, North Korea and Mongolia from 1995 to 1998, and now serves on the International Council of the Museum of Modern Art in New York City and the International Advisory Council of the Tate in London. Uli Sigg discussing freedom of speech in front of one of the art works.

Why should you see this? Because  you’ll get a fairly good impression of something that is probably impossible to explain: China today. In a country where freedom of speech is an extremely complex issue, artists express their views and feelings by painting, sculpting or producing different forms of art. Reading a thick book about China will probably explain less about the country, than observing this exhibition with an open heart. At the same time, you’ll go out of the museum feeling like that kid who hears the whisper and doesn’t know what to make of it.

Some of the photographs displayed in the museum were real offices of Mayors and members of the Party in rural China. I was shocked by how basic they looked. In one of them there was a switched off computer (bottom left in the picture below). The computer, Uli Sigg explained, is purely a show of power to impress the local citizens: nobody can use it. Uli Sigg in front of the pictures showing the offices of powerful politicians in rural China.

Economists, observers, politicians all agree that cheap products and wild exports are not sustainable anymore – China needs a change that allows sustainability. Deflation was represented in the exhibition by a collapsed army trunk completely made of luxurious leather – yes, it looked exactly like the Tod’s bag I was wearing that day! It must have costed a fortune: the finish and the materials looked wonderful. I looked at the tank and felt so sorry…I guess the idea of all that work for nothing really was a good metaphor for the state of Chinese economy. A deflated tank made in luxurious leather. You get an idea of what censorship means by watching some of the art pieces and realising that, at least up to now, they can be seen only outside of China. An example in the photos below: a fictional hotel represents the “Westernized” China with all its wretched new habits. Sex, drugs, violence and more – you can’t display this art in China today.

4- There Is A Common Feeling Of Mystery

What lies underneath? China’s mystery is somehow an inevitable part of Chinese life. An installation of 1300 beautifully framed documents that used to be displayed in the best part of a typical Chinese house and have completely lost their value – times change. 6-The Chinese Google (Baidu) is censored…but not for everybody

Baidu, the Chinese search engine, censors, for example, Facebook. But there are 95 million Chinese profiles on Facebook. During the talks following the exhibition a young Chinese executive from DJI (the firm that made drones mainstream, produces components for Iphones and computers and has 70% of the marketshare worldwide) was asked how it’s possible that a hugely successful IT company cannot access internet properly. He answered that a Chinese firm can easily apply for VPN, so individuals like him have free access to any information. China can be free, successful and even beating Silycon Valley – but contrasts remain dramatic. A talk about economy followed the art exhibition