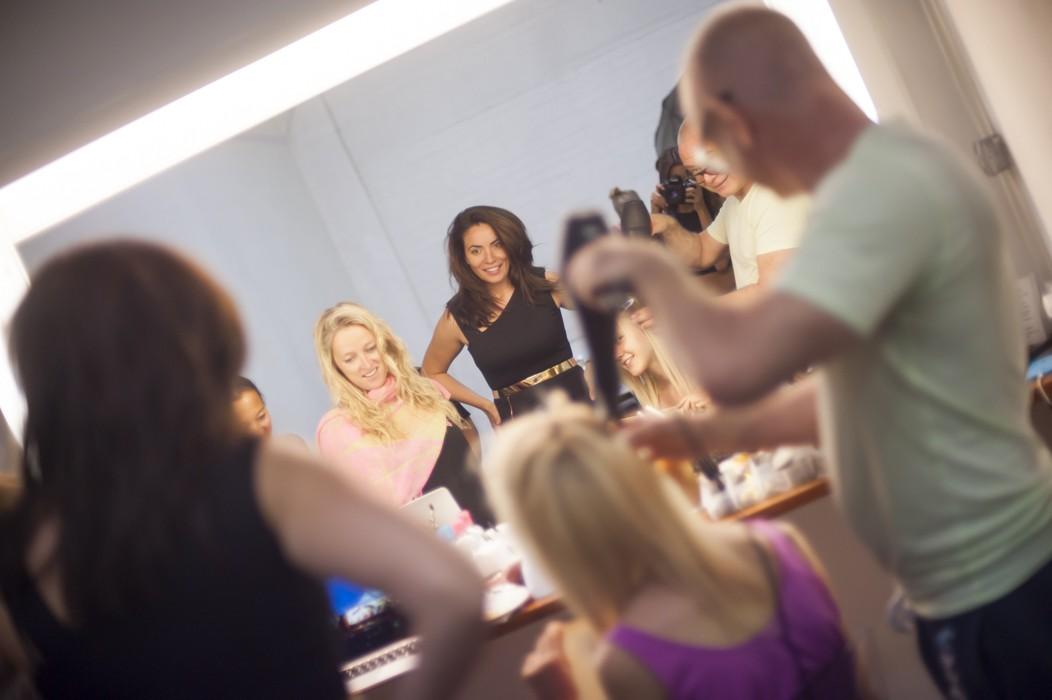 What is it really like working in fashion, and how is it really like to shoot a professional campaign?
We went to London to follow MAIOCCI founder Crina Okumus and her team to find out – and it was intense to say the least!
The idea was the following: MAIOCCI is a collection for a strong metropolitan woman who appreciates luxury at affordable prices. Its second line, M by MAIOCCI, talks to a more playful and edgy audience… How can all this be translated in pictures? 2 Models were selected… after a casting of 130.

MAIOCCI sells exclusively online, through partnerships with House of Frasers, Zalando, Yoox, etc. Founder Crina Okumus explained to us that already at the very beginning of a collection she thinks about the final pictures – that’s how the line will be presented to the world. From the very start, she works in close contact with the designer and develops a concept and lifestyle (what goes together with this piece? How can it be dressed up or down?) that will be shown with a seasonal photo shooting, twice a year. Each dress is designed to be really used all day, in formal or informal occasions and by women of different style and age, but also to be seen online and immediately “understood”. It was hot! But the team kept ordering and bringing refreshing treats. Fruits and orange juice always there as a snack. The first location, for the MAIOCCI line shooting, was an opulent bohemian house in Camden. Its luscious patio was crowded with Crina’s team, a beautiful model wearing winter clothes in the unbearable heat, a hairdresser, a make up artist, a photographer, a stylist, a video maker and Paolo Errico, MAIOCCI’s designer. After make-up, hair, lights, and setting were ready, we all had to walk back and keep at a distance, not to be in the way of the light. The first pictures were taken and checked immediately on the screen laptop linked to the camera. The mass of cables, tools, accessories, props, furniture, food, drinks and objects everywhere magically disappeared and a sleek picture was born: a simple yet eloquent image that summed it all up. One dress, one woman, a tropical background. We felt that all the following images reflected the same quintessence of the clothing line too: one strong image, no distractions, no noise, and …a thousand more things around. My personal opinion? With this collection, a Victoria Beckham type of woman becomes more real and affordable – she also has keeps the same outfit for the whole day – to work and go out by simply adding some details. Crina, Paolo and the team starting to work in the urban jungle. Accessories were allover the rooms..we had fun in trying them on! Beautifully designed chunky bracelets – wish we could wear them all.

The second day was dedicated to MAIOCCI’s younger line, M by MAIOCCI, and was therefore a totally different atmosphere. The location was Worx, the London’s leading venue and studio. Crina’s team moved there to shoot and represent a younger, more playful line. The model dancing to the funky music, jumping in the wind – and the wind was made by the hairstylist’s fan. Freshness and attention to every detail seemed to be the rule. Each outfit was ironed before wearing, each jewel chosen after trying different options. Music, coffees, refreshing drinks kept the whole team focused and energised. And the model? She kept following instructions without ever protesting for the heat, the repetitions of poses, the coldness of a coffee she sipped with a straw (not to ruin her make-up) one hour after it arrived, or for the fact that she stood in high heels under the lights for many hours nonstop.
The result? An edgy and fun – but wearable and affordable – set of looks. A jumping girl as the symbol of M by MAIOCCI Beatrice checking the pictures on one of the 16 computers which were used for the whole shooting. Crina Okumus – entrepeneur, mother, founder and CEO of MAIOCCI and great fun to chat with.

During the shooting we also talked to Nicky Weir, make-up artist based in London who works for Vogue, Elle, Marie Claire and many more (check her Instagram to see the looks she made for Natalia Vodianova, Ralph Fiennes, Lydia Hearst, Vivienne Westwood, Blondie and the late Amy Winehouse).

Beatrice: How do you create a look for a shooting, where do you start?

Nicky: I like to work without photoshop and do everything with make up. I talk with the project manager and the team, to understand what kind of image they want to create. I see the potential on a face and over the years I learnt to also feel the mood and energy of the person. Then it happens. The model becomes that woman. Everybody can do the same; it depends on how you want to project yourself. There is a part of acting in life, and in make-up choices too. If you want to feel sexy, you start applying makeup and you become that woman.

Beatrice: MAIOCCI is specialised in versatile dresses one can wear in the office and also to go out in the evening without getting changed. How can make-up help to change the look, any tips?

Nicky: Bring a curler with you, and mascara. Curling your eyelashes and applying a touch of mascara will immediately open the eye. Eye drops also help. Evening looks are in general about applying a bit more, but you can also get away without using any foundation, because the lights are not so strong, in the evenings. It all depends on how you feel: some girls are all about a red lipstick, some love to be natural. Don’t try to change your personality; follow your personality.

Beatrice: And how about ageing? Should a woman apply less make-up, when older?

Nicky: I have seen women in their 70s and even 80s with wonderful make up. Just keep trying what suits you, because your colours do change. Never buy foundation in a department store without trying it in the natural light. Ask for a sample. Try, be bold, be yourself and keep experimenting! Maybe you don’t need your 22, but a 24.

Beatrice: What’s a 22…? Do you know all your make-up products by number?

Nicky: I do actually! (laughs)

Dostinja: I also have a question. How about smokey eyes… I love the look but I read somewhere they might make your eyes look smaller, so now when I do them I feel maybe my eyes look small. Is it all in my head?

Nicky: My dear, you look wonderful. Yes, it’s all in your head! (we all laugh) One of the backstage moments – perfect make-up by Nicki Weir. A cornucopia of brushes, concealers, foundations and MAC products.

The Rest of the Team

Not everybody who worked at the collection’s shooting was physically present to the shooting. Crina’s “angels”- Kelsey, Andrea and Ioana – kept bringing stuff, organising, ordering food and refreshments, calling, checking pictures, taking care of all details like ironing or fixing damaged items. We were treated like Royalty even in the peak of hectic activity. A big thanks for showing us the MAIOCCI backstage, and for teaching us about professional excellence. The Monsters in the studio – thrilled by the new experience! Video making means being a lot backstage and filming almost unseen to capture natural and fun moments. The video was shot by Adrian Rosu.

December 23, 2015 Overall – so easy to dress up!
September 4, 2015 Behind a fashion shooting – how do professionals work? The MAIOCCI backstage