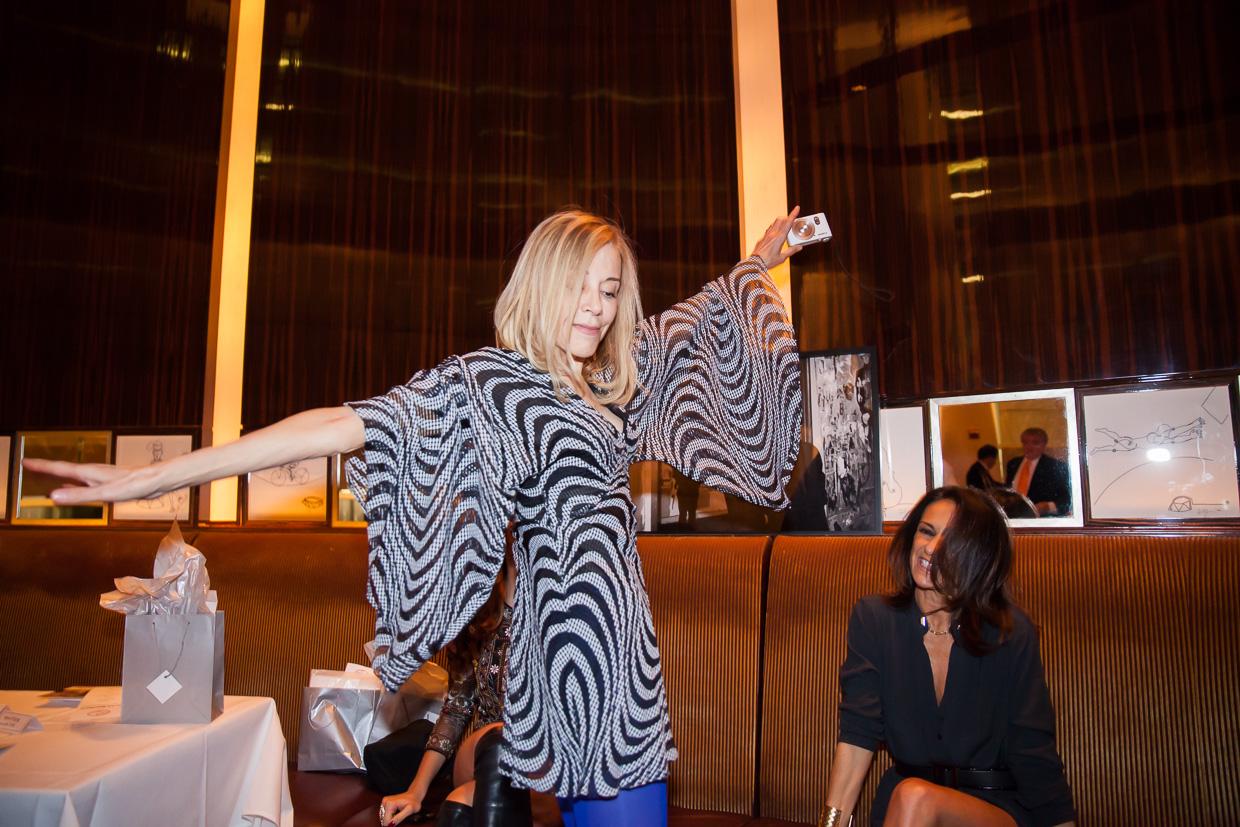 Indeed, being in New York with Paige Powell during a recent trip was like spending time with the past, present and future of New York. From her description of her first job interview with Andy Warhol’s staff to her vegan (and glamorous) fashion choices, time with Paige was anything but ordinary.

A Chat With Paige Powell

Before meeting Paige I had heard a bit about her intense relationship with the art world. In Thomas Lauderdale’s words:

Throughout her career, Powell has been a champion of artists, writers and musicians.  Govinda Gallery‘s Chris Murray once said, “Paige was responsible for Jean-Michel Basquiat’s career,”  in an interview for the Portland Tribune.  “Struck by Basquiat’s poetic and raw paintings, earnestness and eccentricity, she arranged a show at the apartment where she lived … pricing Basquiat’s paintings from $2,000 to $8,000. She also helped to forge a friendship between Warhol and Basquiat. Paige and Beatrice at the Crosby Hotel Bar. Photo by Adrian Rosu.

Beatrice: How did you meet Andy Warhol and became his best friend?

Paige: When I left Portland to move to New York, I wanted to work for Andy Warhol’s Interview magazine.Working there was my dream.  A normal girl from a solid Pacific Northwest family, I knocked at the door and asked for a job as an interviewer for Interview. It was after a deadline and a few staff members were talking in the studio office. They asked me if I thought I could sell ads. I answered that I had been working as Public Affairs Director for the Portland Zoo where I tended orphaned and injured animals in the nursery, successfully campaigned for zoo taxes, edited a monthly newsletter… and marketed truckloads of elephant feces in cans as garden fertilizer. “If you can sell elephant dung, you can certainly sell advertising,” they said. Eventually, Bob and Barbara Colacello hired me. During some of the interviews—in the Warhol studio dining room—Andy would periodically walk through and listen. It was shortly after I was hired that I started to know him.

Beatrice: And what was is like to date Jean-Michel Basquiat?

Paige: Jean-Michel was intensely driven, romantic, caring, comedic, charged with energy and compassionate. At times he would explode with a fiery rage. It was an intense balance.

I had been keeping a collection of images, video, and ephemera from over three decades in Portland tucked away in boxes. Thanks to my friend, sponsor, and mentor Thomas Lauderdale, we’ve been working with archivists to catalogue it all. Uncovered recordings and photographs of Andy, Keith Haring and Jean-Michel ended up shaping my exhibition The Ride,  at the Portland Art Museum. One of the exhibition’s pictures. Photo: Johnny Le, Purple.fr Paige: Yes, the first one was Reclining Nude: Jean-Michel Basquiat, at the  Suzanne Geiss Gallery in New York City. Jean-Michel Basquiat in a photo by Paige Powell.

Beatrice: What kind of child were you?

Paige: I’m one of four daughters and the unconventional one! My name growing up was unusual, I was left-handed and slightly dyslexic, and loved art and animals.

Paige: My mother, an artist and craftsperson, would dress us up in identical outfits like sailor suits, ruffled dress with pinafores, nautical stripes shirts with navy skirts, blazers with emblems, white Peter Pan-collared blouses, plaid Bermuda shorts and red racer Janzen swimming tanks. I had many dresses with very complex designs. She made many of the clothes herself, taking pauses to play the piano. Of the four of us, I was the one who tried to subtly change the look however I could, to break mold, especially when we were going to a school that required starchy uniforms. I’d wear a tutu with a t-shirt and button down sweater to school, or a striped skirt with a plaid top, that sort of thing. Spontaneous and natural. Nothing has really changed since then.

Beatrice: Who are your favourite designers today?

Paige: I’m an animal rights advocate so I  basically wear all non-animal products. Stella McCartney for Adidas shoe, jackets, workout clothes and some Patagonia pieces. Living in Oregon, one is frequently outdoors in inclement winter weather, so one needs to have proper gear. Now, many great designers have cool outwear, so there’s no need to look like Pacific Northwest lumberjackie.

My close friend Kim Hastreiter of PAPER is always on the pulse of cool, new cruelty-free accessories- she sends the links to me.

Beatrice: If you had to choose your favorite non-contemporary art, what would you pick?

Paige: Among 19th century painters, I’m quite fond of the European and Asian animal portraits. I like the work of Henriette Ronner-Knip because she was a talented painter with compassion and love for animals, especially her cats and dogs. You can readily see that special understanding and relationship in her work.

Beatrice: I M going to the MoMa tomorrow, alway a nice treat!

Paige: Enjoy it like it’s the first time in your life – art can always be new!