Fashion Advice Do you talk to yourself? Then You Might Be A Genius

Travel Most Photogenic Libraries in the World

Fitness How to Fight Off Winter Blues 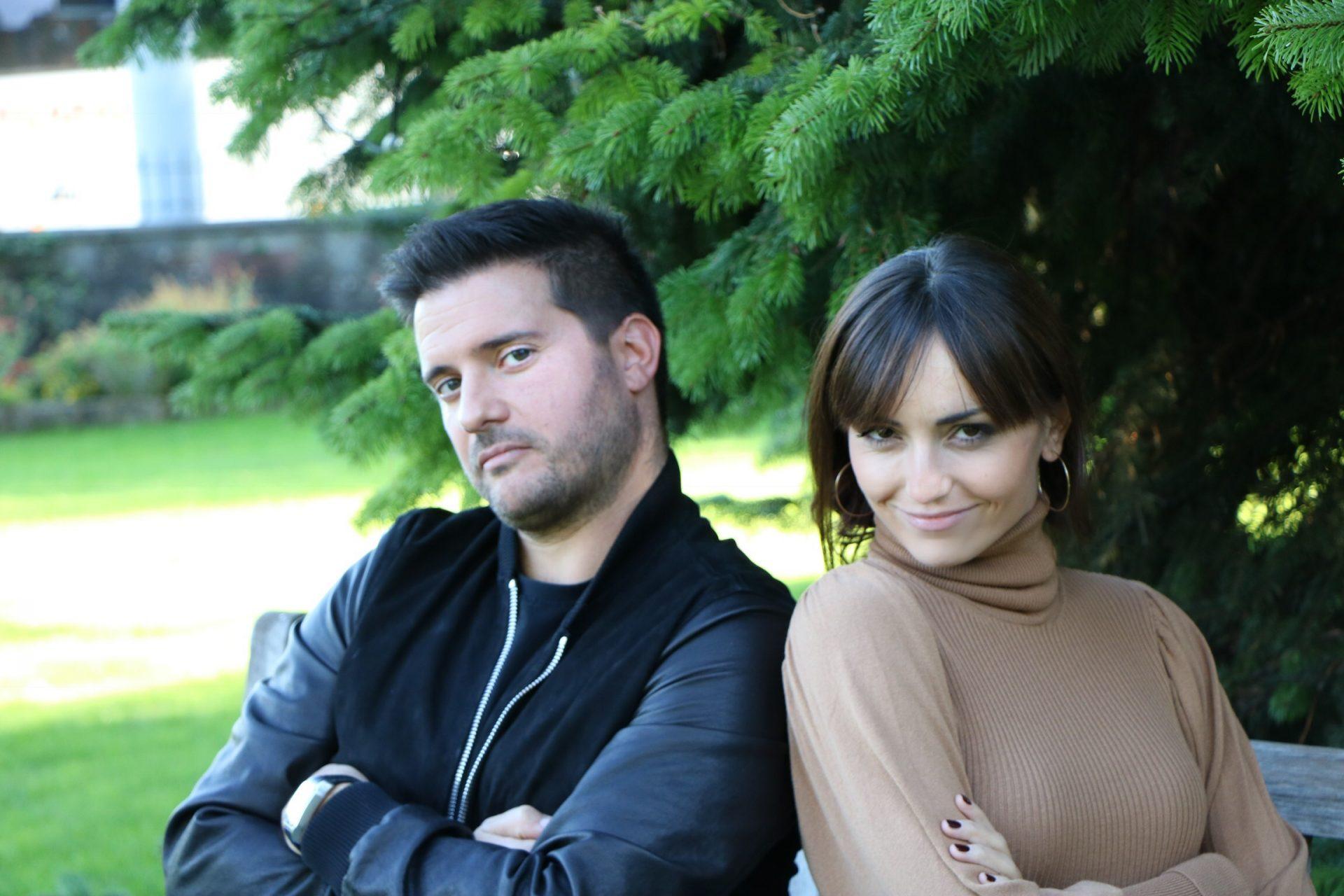 The coolest app ever developed in Switzerland has landed – and its co-founder, Federico Parli, has told us how it works. It’s easy and there’s no catch, but it was a pleasure to hear how the idea was born and how to use it efficiently. The fact that Federico is an old friend of Geri, a charmer and incredibly passionate about his work for sure didn’t hurt: we sat listening to him mesmerised (especially me, because I hadn’t met him before). Here is what he told us on a glorious sunny day in Zurich, during a coffee break in the luscious gardens of Baur Au Lac.
Geri: What is Regalo?
Federico: It’s an app for smartphone and tablet developed in Switzerland, from a Swiss company. We are based in Lugano and our programmers are all Swiss. Beatrice: Is Everything in Regalo really available for free?

Federico: Yes. There is no money exchange whatsoever. People can offer whatever they want to give away, or browse to get things free of charge. Or both! 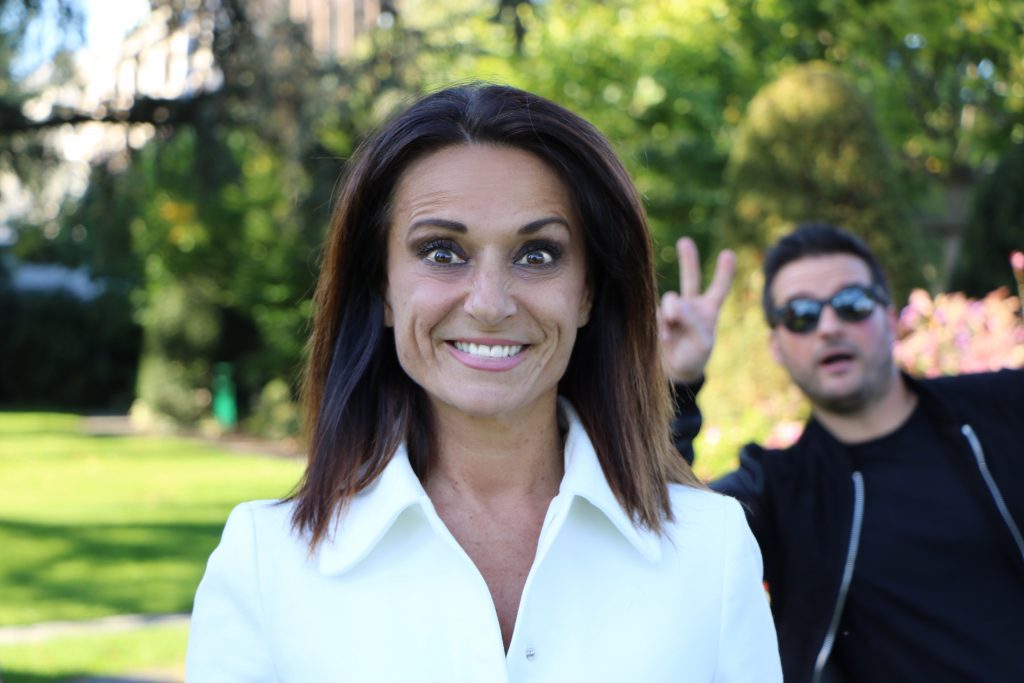 Geri: Why should I give something away?

Federico: Because it’s much better, but especially cheaper, than throwing it – someone else can use it. Why would you want to sell something, especially for a small amount of money? Isn’t it better, smarter and more meaningful to give it away? You do a favour to another person, and to yourself. And what if I tell that sooner or later you will get incentives the more you give stuff away for free…?

Beatrice: And what if I don’t like what the other person will do with it?

Federico: This is none of your business – when you decide to give it, it’s not yours anymore. Someone else can do a completely different use of it: think of an artist, for example. Every object can get a new life. What I really like about this is the fact that each single object has its own story which can be told.

Federico: In a way it is. Regalo wants to promote a new culture of using things. We are working also with schools and universities and will present it during the MBA courses at Lugano University forseen for next year. Students, as one of our first targets,  will be naturally interested. 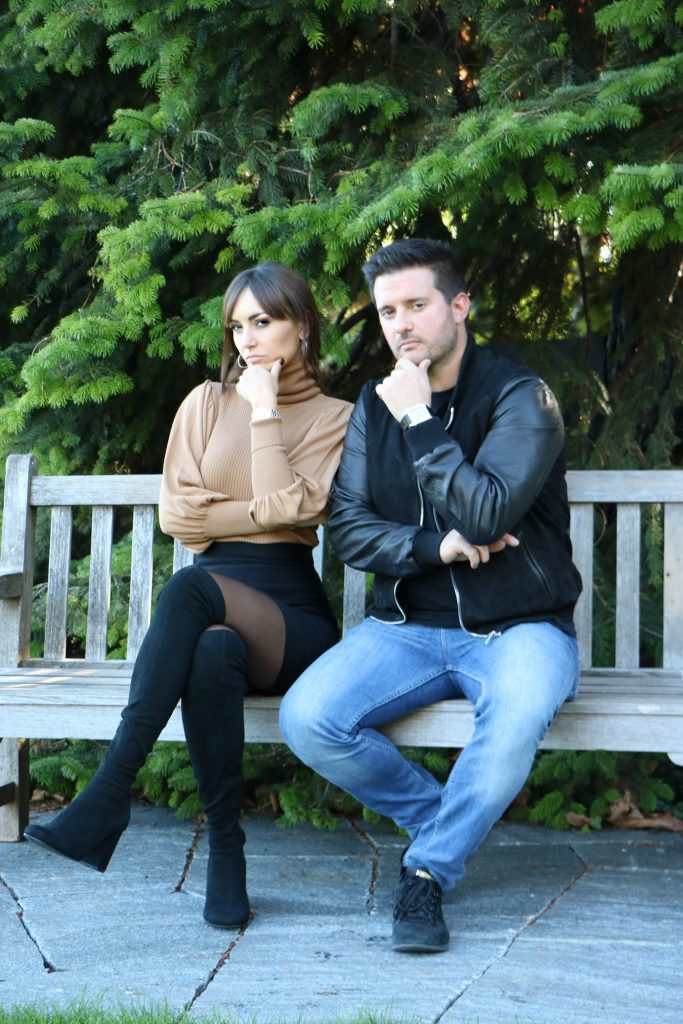 Beatrice: Did you find any resistance to the concept?

Federico: I have to admit that I want to promote a culture that, in Ticino for example, is treated a bit skeptically. In northern countries, recycling has reached another level. Think about Sweden; it’s the first country in the world that has to import rubbish (to produce energy)! So I wonder: if countries like this are similar to Switzerland in terms of life quality, why shouldn’t we learn their culture of recycling as well? A bigger question for me is: why aren’t people aware of the logical evolution from recycle to reuse?

Beatrice: And is the app interesting only for young people, or also for a lady like me? I mean is it really for everybody?

Federico: It is for everybody. I don’t want to compare it to giants like Whatsapp, Uber, or Airbnb, but it’s a fact that, like them, it eliminates differences and puts everybody on the same level. It’s a social exchange too. You do me a favour by picking up something I don’t need anymore, I do you one too by donating. From there on, it might even happen that we start a cooperation together or a friendship: there is always the possibility that a human interaction develops.

Federico: You can decide your own settings, but what we suggest is for you to show in which area the thing you offer can be picked up, and only later, when you agree with the person who is interested, give your address. There is a chat to allow you to discuss these details. Each time you post, you decide how exactly to do it.

Geri: And in case I feel insecure or I have a problem?

Federico: There is a double security system because you can ban someone personally and immediately, or contact our support as well. Apple demands us to give a banning option for every post. So the security is between users, but also between user and support team. 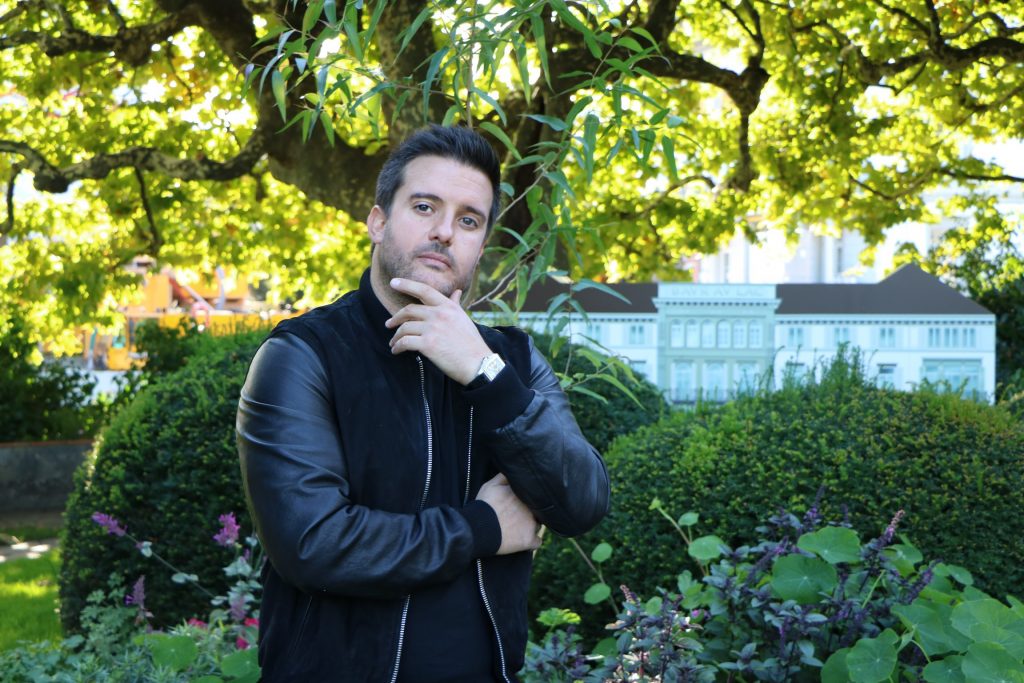 Beatrice: But I guess that people trust a Swiss product.

Federico: Yes, the fact that the App is Swiss made is a quality stamp. On the other hand there are people behind transactions, so it’s good to protect users.

Geri: And the name is Italian! That’s a bit more of a risky choice…

Federico: It’s a challenge, yes. We had a lot of discussions about it and obviously thought about English names too. But if you think of words like spaghetti, opera, pizza, or gratis, you have to admit they have surpassed any linguistic barrier and are now widely understood. So we decided to go for what is very immediate, the word gift, or present. In Italian, regalo. We had always had it in front of our eyes ! We decided to keep it.

Beatrice: But a present can be also something you buy…a portal for presents might be perceived as another app for selling.

Federico: Yes, that could be misunderstood. We need to communicate very clearly that this app doesn’t involve any money exchange. It has to be a pleasure deal for both parts. Everything is free of charge. 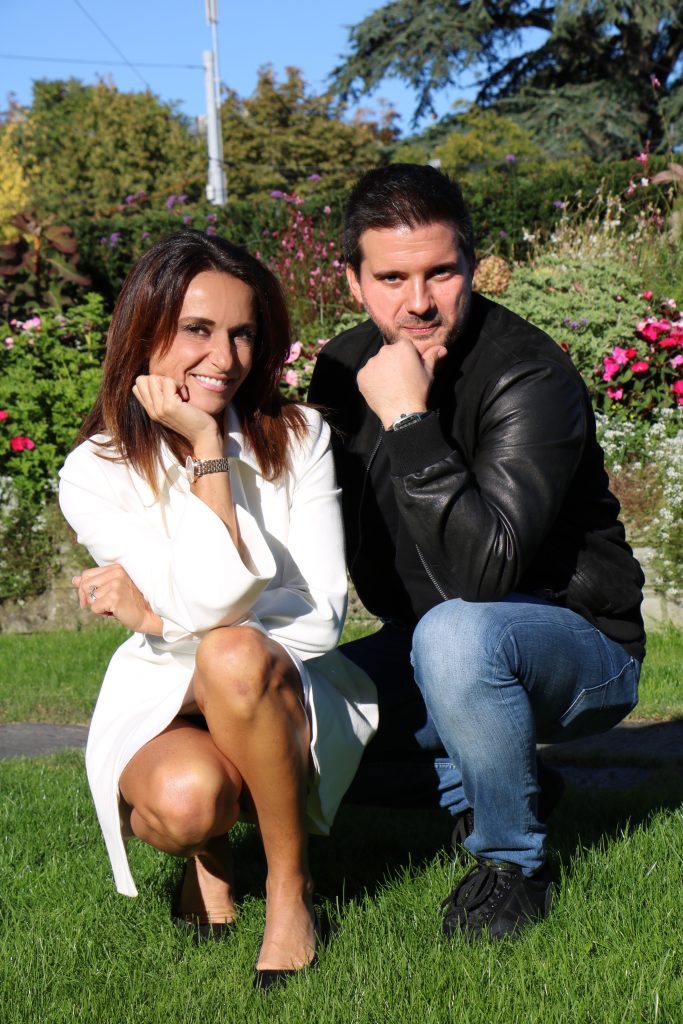 Geri: How was the idea born?

Federico: (looking at Geri) I used to be the worst at wasting and consuming! Geri knows. A real capitalist pig (laughs). Things happen and change you, though. In my case, it was the arrival of my daughter. Becoming father made me ask myself important questions like: why am I here? What is my goal in life? I hope I can give a contribution to this world. Small, big, we will see. It’s my personal gesture to help out and be part of the solution to save our environment. In the past five years, since my daughter arrived, I tried to educate myself. Now I hope I can educate others too.

Beatrice: Who are your main competitors?

Federico: In Switzerland, free things are exchanged mostly privately. There are some Facebook pages where one can post what he or she has to give. The biggest of these pages has about eighty thousands members. Or there are some sections in websites for buying and selling, that are dedicated to things free of charge. But nobody is specialised on presents only, and nobody does it with an app.

Geri: Another difference is the educational aim, I guess.

Federico: Exactly. The difference is technical but also ethical. We aim at educating people to take care of waste and the environment. We are not alone on this planet. And we save money too. As I love to say: Reuse is cheaper than throwing away.

Beatrice: Tell me about the last big difference to your competitors. I heard it’s called FIGO, that in Italian means cool!

Federico: I am sure you have heard about crowd funding. This is, again, a mainstream idea in the US or in Northern countries, but not really in Switzerland. And it’s a shame: if you need something, you should go and ask for it, because many people might be prepared to give it. So we made a section in the app, called FIGO, which means FInding GOods. There, one can say exactly what he or she needs. Imagine you want to build a house for your giant turtle…

Federico: I don’t know! (laughing too) It just popped into my mind as an example.

Geri: Stop laughing you two! Back to business (smiles). So, what do you do when you need to build a house for your giant turtle?

Federico: you calculate what you need, for example fifty kilos of cement, and ask for it. You start a campaign with an end date, exactly like websites for crowd funding do. Even graphically we haven’t invented anything. People can see how much has been donated already, and how much is still missing to reach the desired quantity. You can post photos as well. If a private person has three kilos in the cellar, he can give you his three kilos. If a building company has a big leftover, they can give it all to you and make you happy in one go. In the case of cement, for example, a company can also help students of technical schools who are learning to build and need to make samples. Samples are necessary but quite expensive, so it would be great to put supplier and students in contact, for free. And here starts our next big mission which consist in helping companies, privates and municipalities reduce waste and spare costs but, as for the moment, let’s just leave you with an open door on this point… 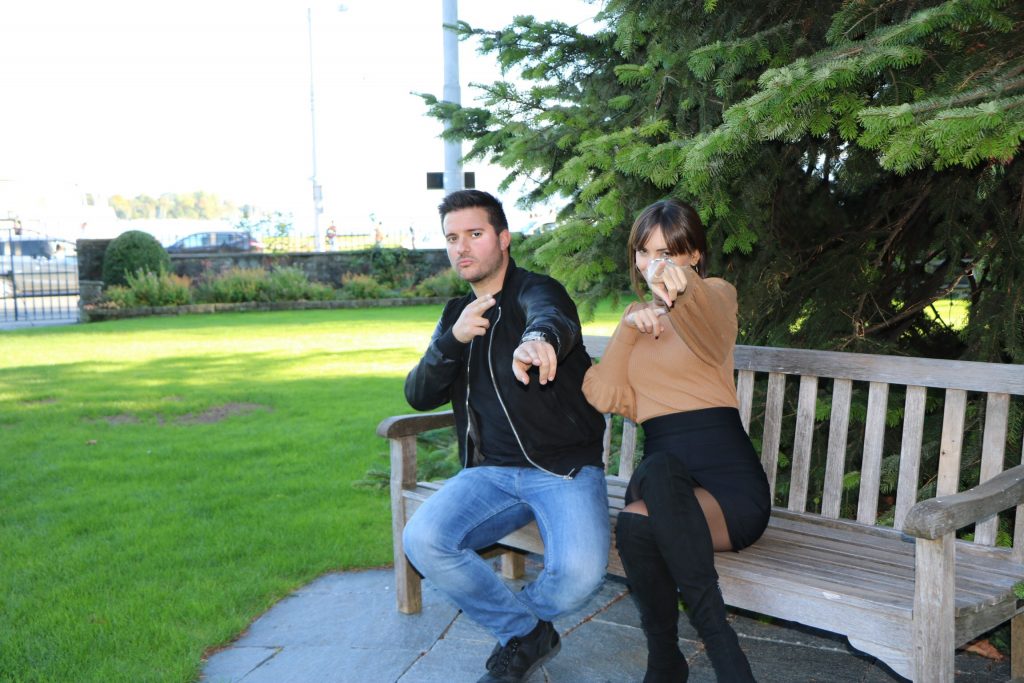 Are they posing, or just having fun?

Geri: And one can also give services?

Federico: Sure. Maybe you want to learn swimming and would like to find a teacher. And maybe a teacher wants to do a bit of publicity and that you spread the word about him. Or you can ask for someone to bring your dog out – the possibilities are endless. It’s called Sharing Economy.

Beatrice: Why didn’t I think of this before?

Federico (smiling): I don’t know. But we are very fond of the idea and hope it can be used to give new life to things too. Imagine an artist taking your old chair and doing a sculpture with that wood. I love art, and there are a lot of artists who can’t afford to buy the materials they need. …so why don’t just help them to get free stuff?

Geri: What a difference since we first met…we used to think that the best of technology were music CDs, and now you are developing an app!

Federico: oh God, yes…do you remember when internet started? We used to start downloading four songs on Monday evening, and they’d be ready on Thursday morning, so in love with the 56k modem! (they laugh)

Geri and Federico go on talking about the “old days” and this time it’s me, interrupting them: it’s time to take photos. Two friends who find each other again, a lot of projects, and a fun atmosphere: we all end up fooling around in front of the camera and having a laugh. Humor and serious work are always extremely inspiring – good luck Regalo! 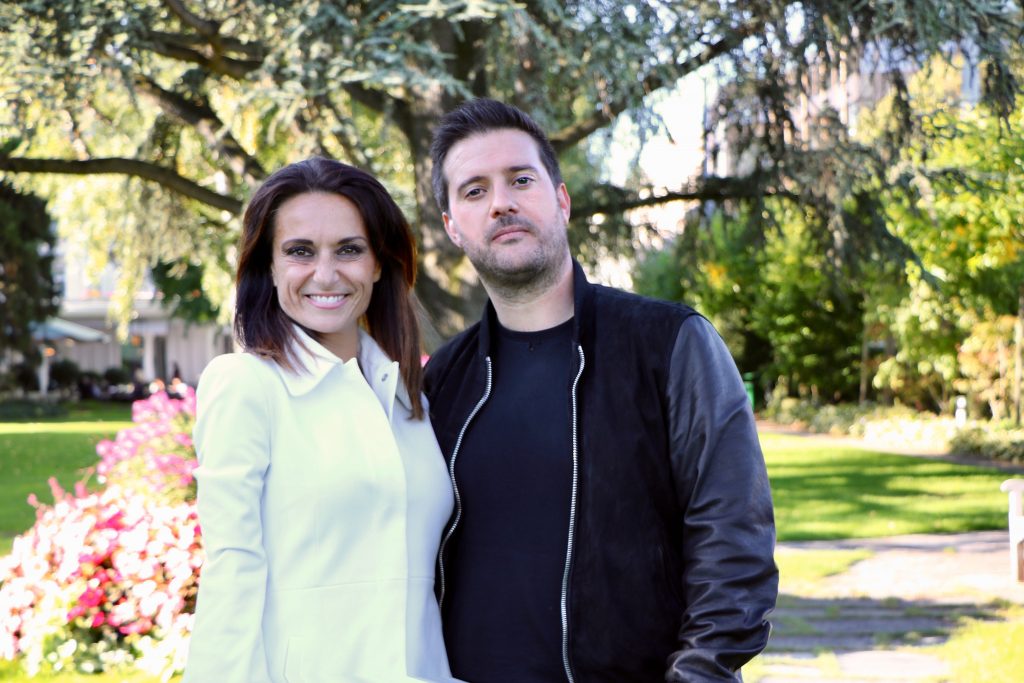