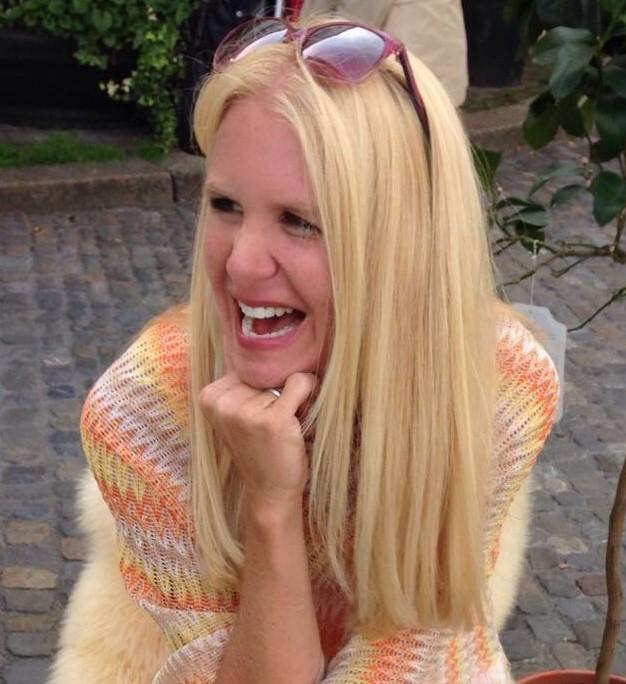 My aunt Simonetta, who has spent decades working in the fashion industry in New York and around the world, was recently living in Florence, Italy, and working for Roberto Cavalli. So, living only a few hours away in southern Germany, my teenage daughter and I decided to make a long weekend get-away to visit her.

We had to get a hotel since Simonetta’s niece from the other side of the family was staying at her place, but we were only a few hundred meters away…and the hotel, Villa la Vedetta, was absolutely fabulous! Gorgeous pool, terrace and views over the city—perfect pampering for us girls! And, as always when travelling, I wanted to make sure that I got in at least one decent run while there, so I asked my aunt if she had a friend who could run 15-20km with me and her answer was, “The only person I know who runs those distances is James Ferragamo.” And she said she’d talk to him about it.

Of course I thought it would never happen, but anyone who knows my aunt Simonetta knows that once she puts her mind to something it almost always comes to fruition.

For those of you who are not familiar with the Ferragamo name (or have lived on another planet your whole life), the next time you are in a major city, strolling through the luxury store district, next to Prada, Gucci, and Chanel, then be aware of that store with the beautifully-crafted windows showcasing exquisite shoes, handbags and clothes and above which in lovely script is written the name: Salvatore Ferragamo. The Ferragamo HQ in Florence

I have to admit though, I wasn’t really sure into which generation James fit into the family—an active octogenarian? A 20-something year old? So I googled him. And wouldn’t you know he was my age and (ahem) very attractive. He also just happened to be the director of women’s leather products for the family business.

Shit. Now I’m nervous. I didn’t google any more. I just wanted to go for a run with a normal person!

So, the next week, after I’d almost forgotten the whole thing (well, not really), Simonetta sends me James’ personal cell phone number and said that he and I should work it out for ourselves.

I immediately went to my teenaged daughter, held out my phone, and announced that I was now in possession of his number. She squealed with delight and the two of us plopped down together on the couch, giggling away, to check out his WhatsApp profile photo. I was almost afraid to touch anything on the phone, for fear of mistakenly sending an audio byte, a goofy smiley or pressing the call button. But with pinpoint precision I managed to save him into my contact list. Whew. Now what? I’m not good at things like this. I HATE the telephone. I could possibly be the only woman on earth who despises talking on the phone, so calling him was not an option. I’d text him. Maybe. Ugh. But I’d have to sleep on it first.

The next morning we left at 6am for Florence. The ride was long; longer than I thought. We arrived at our hotel at 2:30 pm after combating the curvy, narrow Brenner Pass and its brigade of trucks dominating the roads. Had I known what the drive entailed, we would have flown. After checking into the hotel, I called my aunt to see what was planned… and of course she asked whether I had been in touch with James. Uh, no. I answered. Should I text him? Yes, she said…and mention you are my niece. (Duh.) My daughter and I…always ready for an adventure

So, I texted him. Very unassuming…would be great if… yadda, yadda….something about not getting lost in Florence…blah, blah, blah…very flexible with the time….

An hour later came the reply…super relaxed. Nice to meet you…Friday at 7pm would work for him.

I mean, Friday at 2am would have been ok for me. Really, now, who are we kidding here?

A couple of texts back and forth and things were confirmed: he was to meet me at my hotel Friday at 7pm for our run. Ok, ok….I’m just a girl, let me romanticize things a bit!

My daughters asks…Do you think he will come in a Ferrari? One can only hope.

Friday was a great day. Slept late. Leisurely breakfast. Beautiful sunshine. And then a stroll through the gardens of the Palazzo Pitti followed by a bit more shopping where we stumbled upon the Salvatore Ferragamo fragrances in a perfumery and, after picking out a heavenly scent, my daughter said I had to buy it. I said that I would buy it after my run with him. Her don’t-be-ridiculous look was all I needed to change my mind. So of course we decided I’d wear the scent while running with him and see if he recognizes it! He didn’t. Or at least he didn’t mention it. Or maybe the smell of my sweat overpowered it?!? Our goods after a tough day of shopping!

Then we had a late lunch and time for a couple of hours of relaxation at the pool. Well, my daughter was relaxed. I was not.

At 10 minutes before 7pm, we went down to the hotel gardens to wait. I checked the small parking lot and there was a space available for him. And very punctual, at 7:01, he arrived. A nice car, but no Ferrari. I waved him into the back lot, and as soon as I saw him I knew this was going to be fun. He has a very easy manner, a friendly smile and anyone in green, knee-length compression socks can’t possibly be intimidating!

So after some small-talk, we were on our way. I let him take the lead with the tempo which started out at a 5 min/km pace uphill. Oh, boy! The tempo remained high and the conversation flowed effortlessly: running, triathlons, family.

At one point, as we were cruising along on a sidewalk, he suddenly took a sharp right turn and darted up a small set of stairs into a park. I had to stop and back-track. “Hey, you need to put your turn signal on earlier!” I yelled to him. He laughed and when I caught up to him, I added, “You don’t have too many running partners, do you?” Another smile and he shook his head ‘no’.

We ran out of the city and up along the River Arno westward for several kilometers, then crossed a bridge and returned on the other side. It was about 8:30pm by the time we reentered the city and it was filling up for Friday night. We ran past Harry’s Bar, with every outdoor table occupied, where James said “…if you want to get a drink”… Now??? I asked. Another laugh and a headshake. How about a drink at Harry’s Bar?

Then I almost got hit by a bus.

I was one step ahead of him as we entered a cross-walk. We both saw the bus coming from the left which wanted to turn right, across our paths. James slammed on the brakes but I kept going, certain that the bus would stop, or at least slow down, but it didn’t. It did honk though…as if I didn’t see this 10-ton colossus honing in on me?!? Needless to say, I narrowly made it by without getting nipped. I stopped on the other side, and after the bus passed between us, I saw the shocked look on James’ face. He crossed over to me and said, ‘That was close’. I told him my aunt would kill him if he let me get hit by a bus! That lightened the mood again, but I was actually pretty shaken up.

We stayed along the river through the bustling city. James pointed out his store as we ran by. Then his restaurant. Restaurants now too, of course. Past the Ponte Vecchio and at one bridge further downstream we crossed back over the river again. Then, after 17.5 km, the bottom of the last steep hill up to my hotel marked the end of our run as James stopped suddenly and announced, “I’m done”. So we walked the last few hundred meters, holding hands. Just kidding!

Back at the hotel, some easy jokes, a sportler’s hand grip and a couple of big smiles ended our session and the farewell.

Then I rushed upstairs to give my daughter the goods. After a shower and change, just as we were ready to head out the door to go have dinner with my aunt, I got a message on my cell phone. It was James, thanking me for the run and the company.

So I did get in a decent run with a ‘normal person’ after all. June 11, 2021 10 Tips for your First Half Marathon from an Olympic Champion