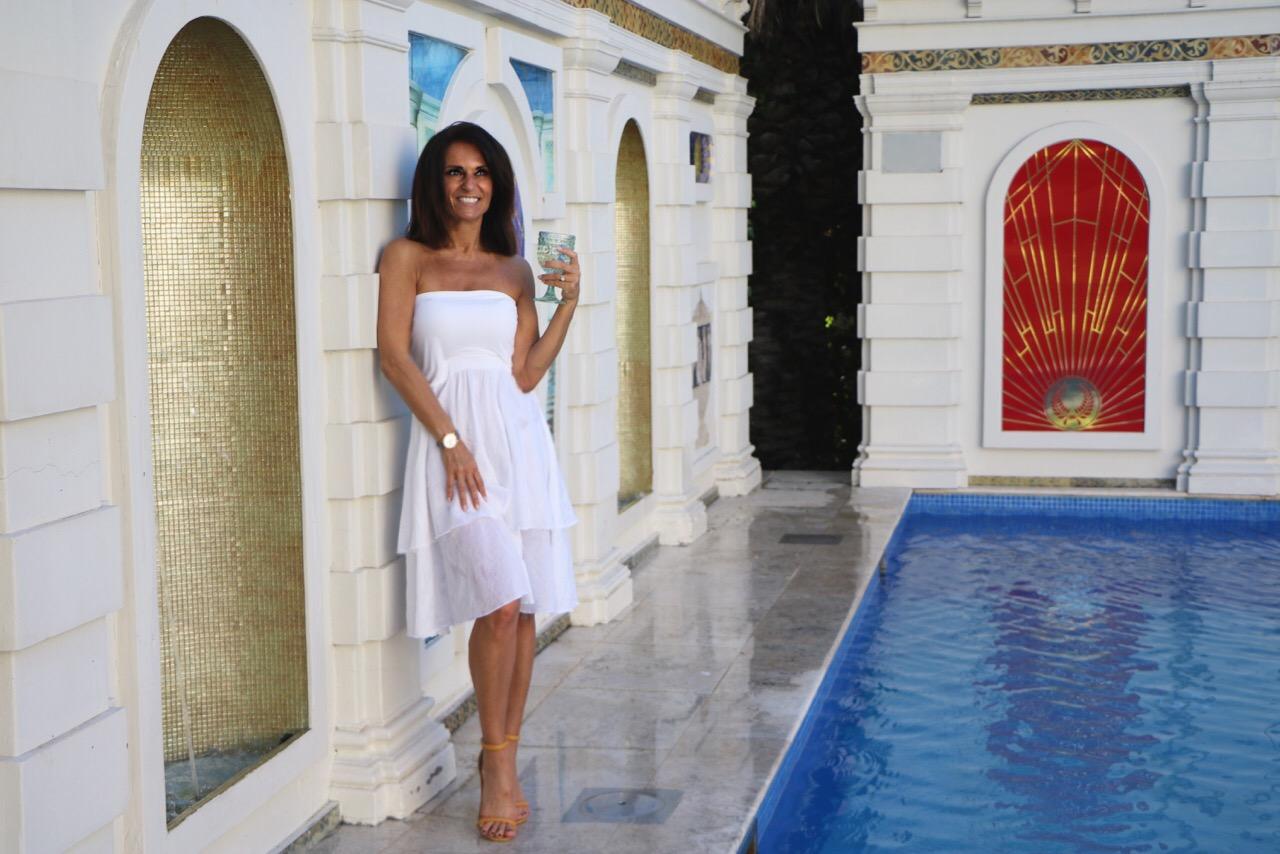 The first thing I heard about the Enigma Mansion in Camps Bay, Cape Town, is that the previous owner built this opulent, luxurious property as a shrine to his beloved wife, adorning the walls with portraits of her exquisite looks & body, some of which have remained hanging to showcase them as part of the creativity of this magnificent masterpiece.

The intrigue behind this property urged my curiosity to visit and when South African fashion icon Gloria Theiler, who bought the property with her husband, Swiss businessman and philantropist Rolf Theiler, offered the opportunity to open her doors to experience first hand her beauty, I was delighted!

Gloria had a successful career in fashion in South Africa and made a natural step to enhancing the interiors of their stunning properties when she married Rolf & moved to Switzerland, 14 years ago. Under her supervision & passion for preservation, Enigma is maintained and epitomised as a true work of art. Fit For A Movie

Enigma is relatively new (it was completed in 2012) and therefore encompasses the latest technology with the beauty of classic architecture and antiques furniture and art. Every corner of the house is spectacular, every detail, accessory, design & component was conceptionalised by the previous owner, a German Entrepreneur, over a period of 7 years, of which 3 years of this was spent on the building process.

Gloria tastefully enhanced the main features of the mansion, but also made some subtle changes that perfectly describe her personality and creativity.

The intensity of the visual pleasure allows for a perfect setting for regular fashion shoots, tv commercials as well as film shoots. The front of Enigma – palatial white against the blue sky

7’000 square meters in the most prestigious residential area on the entire Atlantic seaboard. Spectacular views at every turn. Every fixture, fitting, decorative or structural component of Enigma was imported or creatively made by hand. Door handles & hinges were made in Argentina, woodwork & accessories imported from Bali, exquisite chandeliers and lamps imported and handmade by an artist in California. (Gloria had seen these lamps in an antique shop in Cape Town, and this sparked her interest for Enigma).

Carpets from Essie in London, considered the world’s leading carpet expert. Hand-printed wallpapers from Zuber in Paris, internationally recognised as the Rolls-Royce of fabrics and wallpapers, and the only company in the world still using this technique. These are only some examples of what Enigma offers to its guest. Two of the many columns imported from Indian Palaces, creating the palatial feeling to the villa. (Dress by TA-BOU Beachwear, watch by IWC)

A spectacular entrance and stair hall required a year  of work and eight people for the wall technique only. The majestic chandelier from Cuba offers light during the day, while thousands of moving star lights, recessed into the dome’s paintwork, illuminate the ceiling at night. All images are inspired by the images of the Universe from world-renowned scientist Stephen Hawkins. Eight people worked for a year to complete the entrance

The 3D  cinema is perhaps the feature that gets the most “wow” comments. Plush couches inspired by the Moulin Rouge movie, LED lights, heavy perfumes and sensual atmosphere greet and entertain the guest. Feel like in the Moulin Rouge in the Enigma cinema. Photo: enigma.com

Inspired by the Versace mansion in Miami, this pool must be the most unique and palatial pool in Cape Town, if not the most glamorous in the Southern Hemisphere. Inspired by the Versace villa in Miami: stunning heated pool at Enigma. Pure glamour for the Enigma pool

This is perhaps my favourite room.

Splendid, yet cosy in this massive kitchen with its La Cornue kitchen islands imported from France and for Gloria who loves to cook, her absolute dream kitchen!

Around every corner a new discovery to unveil.

A touch of utter sexiness of the huge black & white NY skyscraper picture over the three Smeg refrigerators made me smile- I absolutely love it! One of the sensual touches in the villa I would love to cook in here!

I had seen many pictures of Enigma and expected something major. But the palatial opulence set against the blue sky left me speechless, marvelling at the attention to the detail. I visited together with my husband and my teenage daughters, and they all reacted like me. We were very quiet first, and took hundreds of pictures after a while, trying to capture the beauty of our surroundings.

Even though Gloria had no involvement in the conception of this house, it certainly was meant for her.

I saw her personality in every corner, her preservation of pieces she calls „art“ that usually would have been removed or changed to suit the new owner’s needs, but no! This is her museum & her home that she treasures in the way it was visualised & passionately created. Enigma is bold yet classic, glamorous yet cozy, a wild dream but also a place the Theilers call home. Bright colors of one of the bedrooms All white against the blue sky Every corner is different, this sofa is my favourite Just a gorgeour backdrop for photos – and to live!