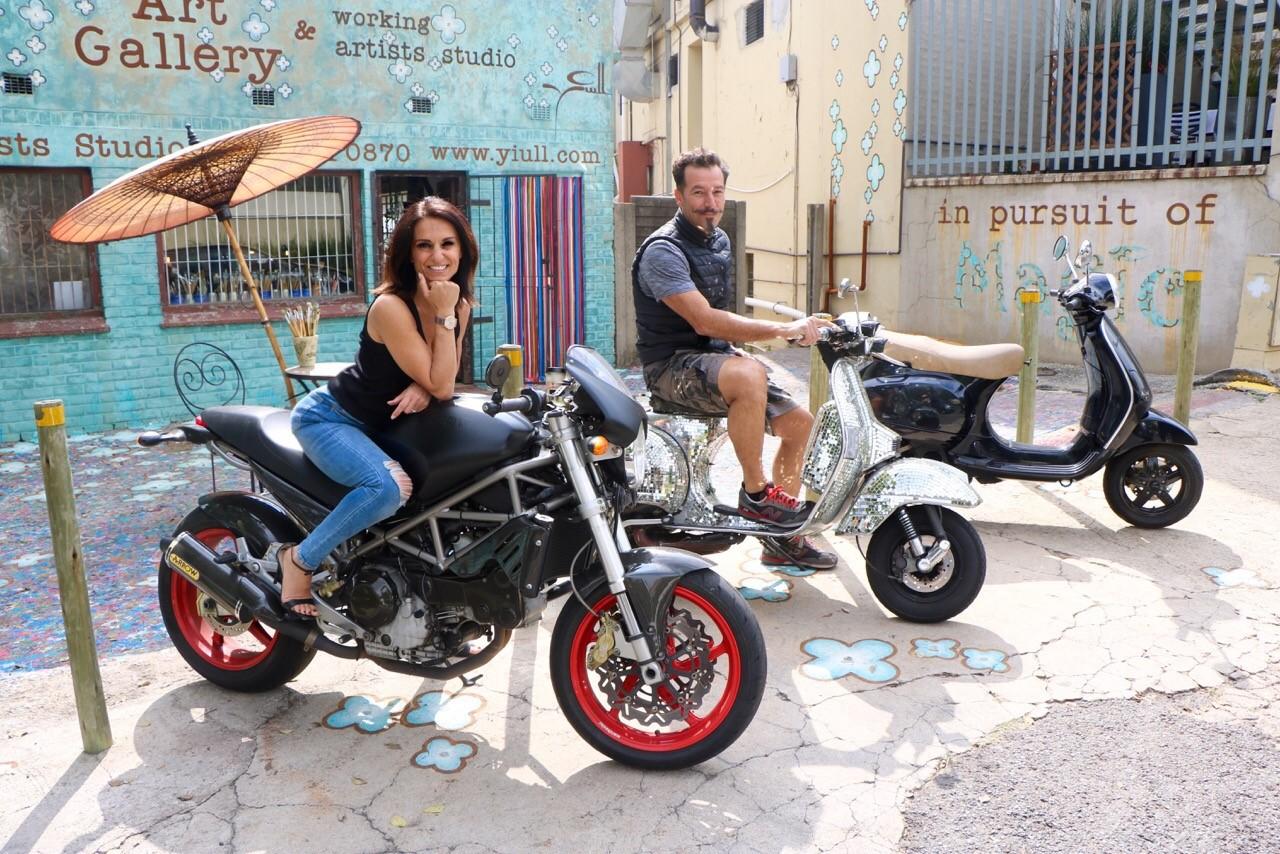 Yiull Damaso is a well-known South African artist whose career brought him to the attention (and various media storms) of top gallerists in the world, but I first noticed him for his good looks when I met him by total chance on a steam boat in Venice.  He was visiting the city together with his girlfriend Michela, his manager, and I liked them so much that I chatted them up for the whole trip – stuck on the water, they couldn’t avoid me!

Yiull’s thick, long, black, and curling at the edges moustache is Salvador Dali-inspired and a strong indication of who he is: an artist, respected and controversial within his world. Just a little detail makes him different though – Yiull looks great. Yiull’s painting The Night Watch, where he depicts Nelson Mandela undergoing autopsy, sparkled an incredible amount of criticism: Yiull dared seeing Mandela as a man (not only as a legend) and somehow went too far. The media coverage and controversy were so extreme, that Yiull even received multiple death threats. 3. He Painted The Most Offensive Painting Ever Made

The Night Watch has been defined The Most offensive Painting Ever Made by Alix McKenna and an insult to our society by the African National Congress.

Midway through painting it, on 9th July 2010, the Mail & Guardian published a picture of it on their front page starting a roller coaster ride for myself and the painting. This midway photo of the work was used extensively worldwide and so very few, if any photos of the completed work appear anywhere, says Yiull.

In the painting, various prominent South African political leaders, from Desmond Tutu to Frederick De Clerk, Zille and Mbeki, are arranged around the corpse of Nelson Mandela. The painting bears intentional similarities to Rembrandt’s ‘Anatomy Lesson of Dr. Nicolaes Tulp‘. Although the title is another nod to Rembrandt’s own The Night Watch, Yiull has his own reasons for naming it such.

The title of the painting, for me, is as important as the idea behind it, he says.

In calling it “The Night Watch” I wanted to ask who is watching this machine or engine that is South Africa?

4. He Owns The Coolest Vespa In The World

Parked outside Yiull’s studio in Johannesburg is a pretty special Vespa customised by Yiull entirely . All glass and mirrors, it gives the impression of a disco ball with wheels. I fell in love with it when I first saw it in pictures, and adored it even more when I finally sat on it outside Yiull’s studio – my kids where with me and agreed it is super cool. By Art critic Hazel Friedman in the year 2000. He has commissioned for a range of works by The One And Only Royal Mirage Hotel Dubai and the The Royal Livingstone Hotel Zambia.

…or at least write about him regularly! He has been featured on BBC, The Guardian, CNN, The New York Times, The Los Angeles Times, Corriere della Sera and and in three documentaries: German TV, Wits Films School and University of Tschwane Artist Film School. 9. He Has Been Banned From The US

In 2000 during a trip from Europe to USA, Yiull was stopped at the border and denied an entry to America, under accusation of traveling to work illegally. The result is perhaps my favourite piece of art: the $100 aptly titled “Defrauding the American Government with Intent”, which is the status ha was categorised under erroneously by Immigration. The work has hidden social and political commentary embedded in it…can you spot them? Easiest to see is the Anonymous moustache that Yiull also bears.

I might be totally biased because I like Yiull personally, but here’s my non-expert opinion: I see a lot of art without heart or that is just a copy of what’s fashionable and vaguely commercial. Yiull is exactly the opposite. Hardcore honest and in love with his job, Yiull lives surrounded by great art and keeps producing more of it. Be it in his works with rust or in his Mandela’s portraits, in his nudes or abstract work, or even in his exhibitions to showcase other artists, Yiull constantly shows a freshness and creativity that always gives me an emotion.