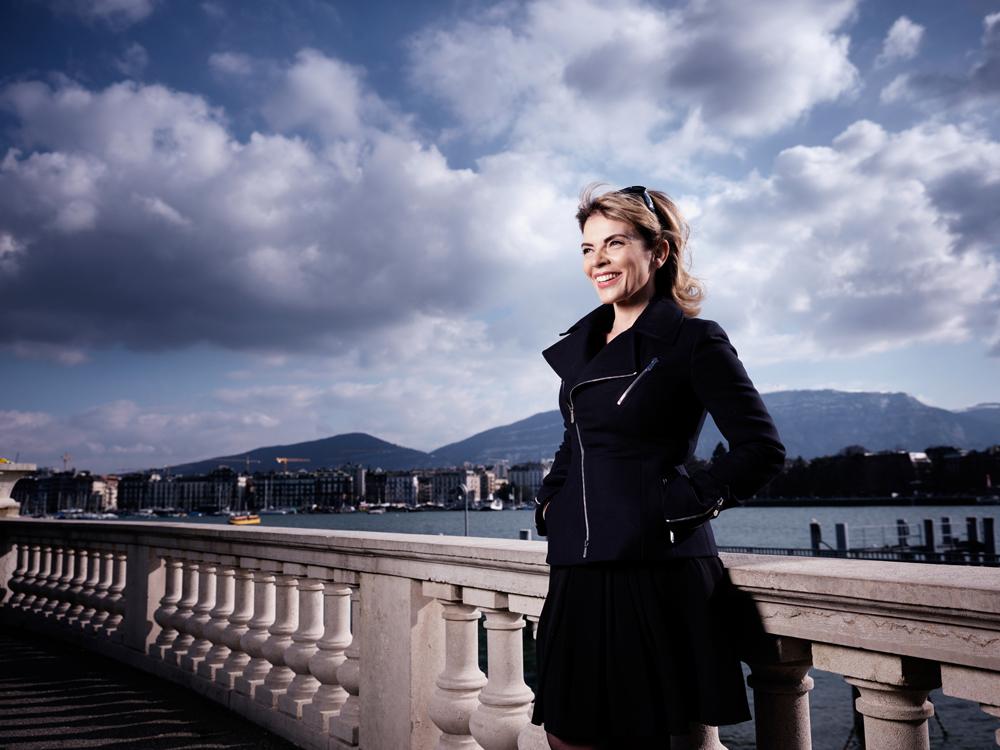 Celebrating strong women – I went through some old interviews and decided to repost this one.

Caroline Lang is Chairman of Sotheby’s Switzerland and one of very few female auctioneers. She works in 4 languages and has conducted auctions in Switzerland, UK and Germany; in 2011 she was instrumental in realising a world auction record for a group of works by Gerhard Richter in the New York sale of “Abstraction-Figuration”, and she conducted historic week long sales like the one of the Royal House of Hanover in 2005. She is internationally recognised for her expertise in Impressionist, Modern and Contemporary Art and has advised some of the most important collectors worldwide. She also can’t cook an egg and is bad at mathematics, or so she claimed during our interview. I found that very refreshing, because I felt she was not trying to be a woman with superpowers, but she was simply being herself. Beatrice: Is it true that you don’t write appointments down? I have the impression that you are the least technology and internet addicted professional I have ever met.

Caroline Lang: It’s true; I don’t have an agenda to write things down – something that drives my assistant nuts – I remember things. I had a technical problem and lost my data once, so I know you can’t rely on the phone , therefore I remember. For example, if I travel, I have a ticket. If I am in the Basel for the art fair… I do what I have to do in Basel at the art fair. My job is quite spontaneous, there is a daily framework I know, and then I need space to go with the flow as advising clients depends on circumstances and requires time. I am also in the internet a lot; but when I am with somebody I am off.

Beatrice: is this because you need time to detach from the pressures of your job?

Caroline Lang: Well, I simply need time and I have fun. One of the lessons I received from my father was to have fun with whatever I would choose to do professionally and whatever I would do in my life. My father was a real role model for me and taught me that happiness is a decision. I remember very vividly what he said to me when I was ten. By the time I was born he was sixty , so all my friends had younger fathers. After returning from the Birthday party of a friend, I told him that I would have much preferred to have a younger father, like my girlfriend had. He looked at me and said : “you decide right today if you are going to be happy or not in your life. If you compare yourself to other people, you will always find somebody prettier, more gifted and luckier than you. If, however, you are your own reference and person, you will always be happy”. I have never forgotten this lesson. Caroline and Beatrice during the Interview. Photo: Mike Flam (mikeflam.ch)

Beatrice: It seems you knew quite early what you wanted to do.

Caroline Lang: If it was for me I would have been a dropout at 15, my parents forced me to finish high school. I didn’t want to study and never went to University. And I still believe that one can study something, and do something totally different in life. On the other hand it’s difficult, today, to get a good job in the art world without having graduated. It became like a passport to show to a potential employer. Not everybody would want to do what I did, which was calling Sotheby’s twice a day for three months until they were so tired of telling me no, that they gave in and gave me a job as an intern. It was the job I was passionate about, and I learnt it by doing it.

Caroline Lang: Due to different circumstances, my father had to do an apprenticeship at the age of fourteen and could not continue his studies. Much to his regret as he wanted to be a surgeon. He became the CEO of the Dreyfus bank in Basel instead and enjoyed working until the day he died. And I give you another comparison. I love India and I travel there once a year. I was discussing arranged marriage with an Indian friend of mine, and I asked him how it is possible to marry a person who has been allocated to you by the family. He said that they have a way of saying no, but yes, as a general rule they do marry a person they never met before. In Western culture, he said, referring to marriage based on romantic love, a really hot dish is put on your table. All it can do is getting colder with time. In their culture, instead, they are given a cold dish. All that can happen is that it gets warmer. When you are into something you learn to love it. I find this a wonderful comparison. Caroline Lang in a Sotheby’s portrait.

Beatrice: Why do women succeed less than men, in the art world?

Caroline Lang: Do they? I am not sure they succeed less. It’s a matter of being rewarded for what you are capable of. I came to the conclusion that, in the world of artists, the only women who are really paid like men are in music. Madonna, Beyonce, Lady Gaga get that reward. For women painters the answer is quite complex and I think I could talk about it for an hour. Are women worse painters than men, are they better creative forces, are they better at reproducing? I’ll let you think for yourself about that. But one part of the answer is about priorities: women have different priorities. I recently spoke to Anne-Sophie Pic, the only female chef with three Michelin stars, and she told me: “it’s very simple . Since my child was born, my priorities have shifted”. People tell me again and again, in interviews, that I inspire women. But do people who have Gisele Bündchen or Margaret Thatcher or someone else as a role model really succeed? Following your passion and being your own person brings you success, not wanting to do what someone else does.

Beatrice: So you think the solution is not in education or in inspiring women, but rather making them aware of whom they are?

Caroline Lang: The solution is again a puzzle, and one piece of it is in your childhood and within the family. Any child needs a mentor, somebody who helps them discover who they are, encourage them to be what they want to be and make them feel “allowed” to be successful. In my case, this decisive role was with my father. Personally, I believe that your parents should be the social spine in your life, or at least this should be their job but it might as well have been a godmother or a teacher. I don’t believe you succeed in life better because of a woman to woman relationship, and again I don’t really compare myself to another woman or man for that matter. You need to feel you can become successful in what you do, and your parents can help to give you that feeling of confidence from the start. Beatrice: School systems in most – if not all – countries regard art as a less important discipline than, say, mathematics or technology. It seems education doesn’t recognise art as a big business too.

Caroline Lang: I wouldn’t say so; The art market has so much evolved over the past twenty years that it requires people who understand art but also have many other qualifications and business acumen. In addition, technology and the arts develop in a parallel way. Internet is just another dimension and many artists use it. Where there is a financially strong industry, culture and art develop too. It was like that in France in 1900, then in Germany in the 70s, for example. Look at what happened when China opened. Right now I am very interested in the Los Angeles school, for the same reason.

Beatrice: Are buyers all genuinely passionate about art, or do you find that some of them buy purely as an investment?

Caroline Lang: There are many different groups: traditional collectors, art lovers who can’t afford to buy what they would like, people who want to diversify their patrimony, and also people I would have never thought they would buy, when I first met them.

Beatrice: In what respect?

Caroline Lang: Appearance can be deceptive. Earlier on you asked me about my summer job when I was fifteen, and this is something I learnt then. I worked as a maid in a 5 stars hotel in Basel, and one day I was putting some cookies on the bed, when a little boy saw them and run towards me to get them. His mother grabbed him and told him: “you don’t talk to people like that!” I was young, but I already knew who I was and thought: watch this space. Some of my best collectors today told me that they like to deal with me also because I didn’t snob them and because we had genuine conversations. If someone doesn’t speak the language or doesn’t look rich, do not judge their appearance! Beatrice: What is a good starting point to be an art connoisseur?

Caroline Lang: Today the world is a global platform, so everybody has access to art, much more than in the past; one doesn’t need to travel or go into libraries to see a lot, it is all in the internet and in the art fairs and museums. My personal suggestion, when people ask me what to buy, is to look a lot, not to hear a lot. Look, don’t listen. You have to see a lot of pictures with your own eyes, to find what you like…we are going back to the same thing: be confident in your own choices.

Beatrice: In what language do you think when you are really upset?

Beatrice: Have you got a sort of uniform, for work? I mean an outfit that requires no thought and is good in almost every occasion.

Caroline: I like black, or black and white, and sometimes I add a touch of colour. And I love high heels! They make us tiny women noticed and they give a good posture. I especially love Tango shoes, I have a big collection by now. I love dancing the Tango, it is a beautiful discipline. I prefer not to do any sport which doesn’t include high heels. Beatrice: When do you experience the state of flow – being so deeply lost in what you are doing that you forget everything around you?

Caroline: When I dance the Tango, when I do deep sea diving, and when I do that thing starting with the letter “S”…let’s say socialising! (laughs) Beatrice: Thank you very much for your time, I will visit Art Basel and enjoy it fully!

Caroline: You are very welcome. You have curly hair and you straighten it, don’t you?

Beatrice: (caught by surprise): ahem.. yes. Is that so clear? I thought my hair looked naturally straight.

Caroline has a collection of Tango shoes – they are feminine and very comfortable for moving. Photo: ffshoes.gr