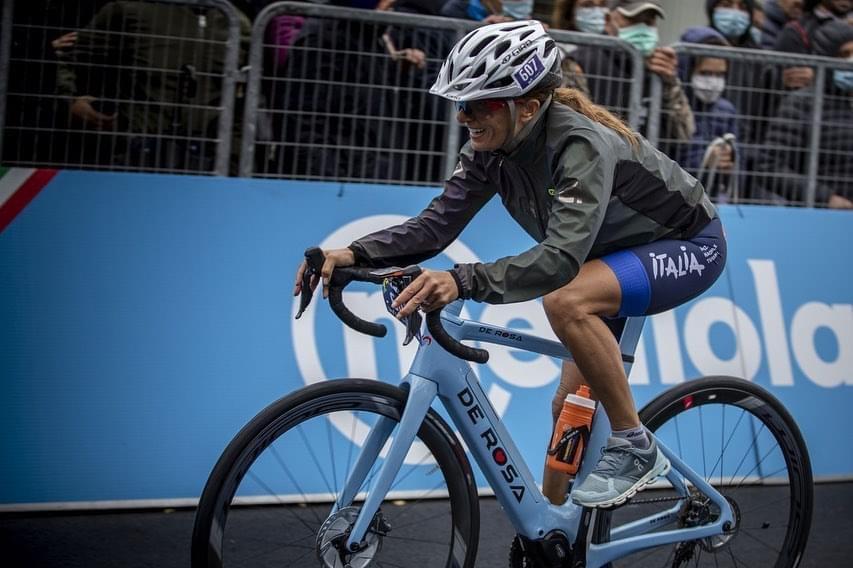 The Most Spectacular Experience in Italy

If you want to feel like the top cyclist in the world, biking along breathtaking landscapes and cheered by entire Italian villages, arriving at finish line completely drained and sweaty or shivering for the cold and rain, while all cameras focus on you…now you can, by joining the Giro-E. And if you think you are not good enough, think again.

Even a total beginner  like me, who couldn’t switch gears on a bike and initially declined the offer out of fear, had the experience of a lifetime on what is considered the second most legendary race in the world. How? Thanks to the fabulous Enit team and of the electric engine of my e-bike, of course.

Giro -E is a cycle tourism event included in the calendar of the Italian Cycling Federation (FCI)and organised by RCS Sport during the Giro d-Italia, along the same route and on the same dates. The event is intended to allow all bicycle enthusiasts, amateur cyclists or formers pro riders to experience the thrill of riding along the roads of the Giro d-Italia.

Riders must assemble at the starting village 3 hours before the scheduled queuing time. The complete teams must present themselves on the stage for the presentation and signature (which is fun!)

Every day, all teams will have to carry out one or more regularity tests. The Organisation will provide the averages to each Team Manager each morning. The Team that comes closest to the assigned averages will win.

Sprint to the Finish Line

The Captain or Vice Captain will be the only competitors who can sprint to the finish line each day.

Mandatory test 48 hours preceding the race, mandatory mask before and after the race, gloves or sanitised pens to sign and fill up documents, temperature detection before entering the common areas, social distance.

My Fabulous Experience with Enit

Ok, the fact that I was in the best team (we won), the most ironic one (all others chose to present themselves on stage with hard rock songs, we chose some Italian disco music from the 70’s that made all mamas and grandmothers dance on balconies and streets), the most empathic one (I was constantly helped, encouraged and protected by everybody, without even asking), the most international one (Enit means Italian Government Tourist Board and its team is composed by journalists, tour operators and influencers from allover the world) and the most good looking and best dressed one (do I need to explain that?!)….well, all this really helped to create an experience I’ll remember for a lifetime.

But the Giro-E has this effect on everybody. It wakes up the beast inside all competitors, makes them sweat, laugh, dream and ride in the most beautiful country in the world, giving unforgettable emotions to every single participant.

We started from Sicily, in Giardini Naxos.

The first night I didn’t sleep, fearing that the captain, seeing me on the bike, would kick me out. And I read it in his eyes: he almost did (Note: the captain, Max Lelli, has won one Young Rider Giro d’Italia, has done 14 Tour de France and has more than one and a half millions km in his legs).  But then he decided to take me on board, allowing me to stop and jump in the bus when conditions were too demanding for my poor skills. By the way joining the bus or the car for technical assistance is also very good fun: when someone needs a battery change, for example, the car is allowed to sprint in the middle of any village or place, with the police approving and even screaming: “Vai, vai!!! Forza!!”Giacomino, our driver and e-bike expert, clearly enjoyed the James Bond kind of drive.

Then the race started. I honestly thought I would never see the rest of the team, but the regularity tests were made for all levels and a cyclist (Max, our Captain, or Maurizio, the Vice Captain) was always near me to protect me from the wind, instruct me for gears and technique, give me food, push me behind my back…essentially, to allow me to stay in even if I was so much weaker.

Jokes and camaraderie followed. I had to concentrate not to fall from laughing –  I felt like a schoolgirl on a trip  with her classmates. Finally I relaxed enough to be able to see the breathtaking landscapes of Italy, smell the sea, admire the nature, fear the uphills and…switch the engine on to the max!

After arrival, a fantastic highlight was waiting:  the Pros arrived, and we watched them from our hospitality area. If we were not already motivated enough, this was the final kick.

After the transfer to Calabria, on the ferry, we arrived at our next hotel. The atmosphere at dinner was upbeat – the Enit team had been winning since day number one. Plus, Italians are open and warm, and can connect with you rather quickly. I felt at home and could finally relax . I went to bed exhausted and completely happy.

The second day started from the little village of Scigliano,  where locals filled up the square to watch all teams and cheer. We got encouraged by their positive reaction to our retro song and danced shamelessly, laughing and enjoying the party feeling.

We started the race and the weather got worse and worse, wet and freezing. No need to say – after the regularity test I gave up and went in the car…until Giacomino proposed me to do the finish line. The thought of passing under the arch of Giro d’Italia was too attractive to resist. I went out and had one of the most emotional moments in my life. Every single person on the street was encouraging and pushing me, even those who had seen I had been resting. They made me feel like a champion for a moment, and I’ll never forget that.

The third day started from a spectacular location, Montalbano Jonico. The stage was built over the quite unexpected view over the Ionic Valley and the “Calanchi”,  a phenomena of erosion of  clay-rich soil, created by the work of the wind and rain, and a natural oasis too – what a location for our morning presentation! After that, again, I enjoyed some  glorious roads, a fabulous atmosphere with the team, another incredible finish line and my last change to normal clothes.

I went to the airport full of impressions  and images, but also in a melancholic mood…I already missed the team, the adrenaline, and what almost felt like it was too good to be true: was it just a dream, or did it really happen?

Now, at home, I am still overloaded with memories. A world opened to me, and I finally understood while so many cycle enthusiasts and amateurs have such a passion for this sport. But I also understood that, with an e-bike, seeing Italy is accessible to everybody, and is actually the best way.

One thing is sure: if I want to be invited again, I better start training! In the meantime, a huge thank you to Enit and to my team: Alberta, Max, Maurizio, Franz, Georgia, Francesca C., Sara, Giacomino, Francesco, Francesca A.,  and Mauro Bellucci, who took these beautiful photos. And thank you to Giovanni Bastianelli, chairman of Enit, who made it all possible and followed it all backstage. 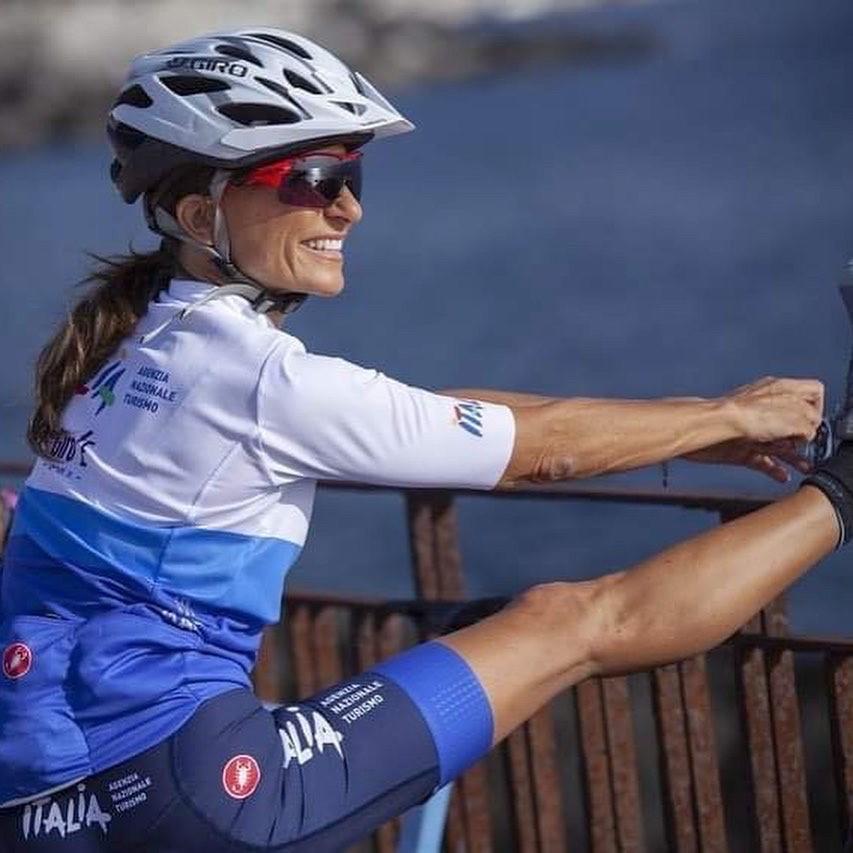 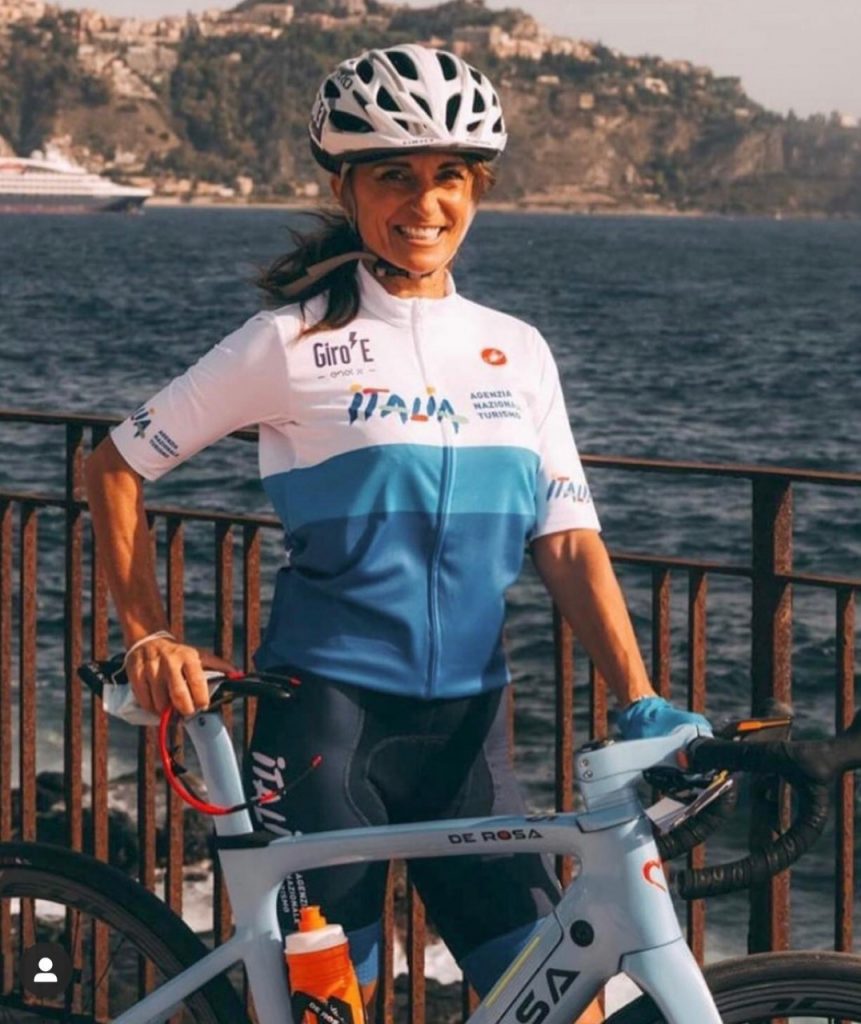 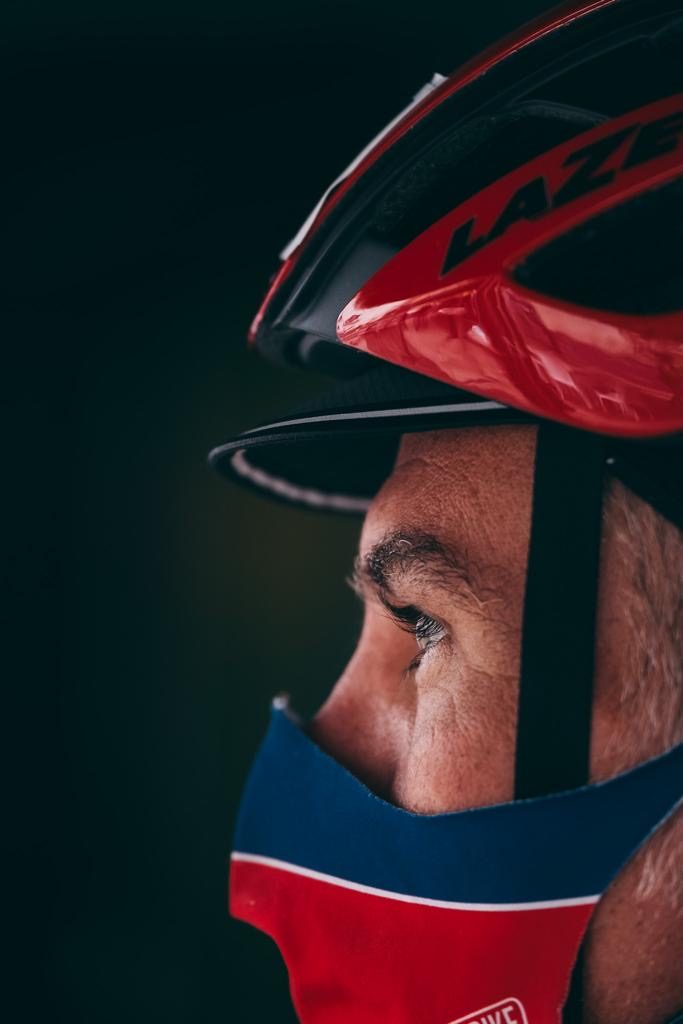 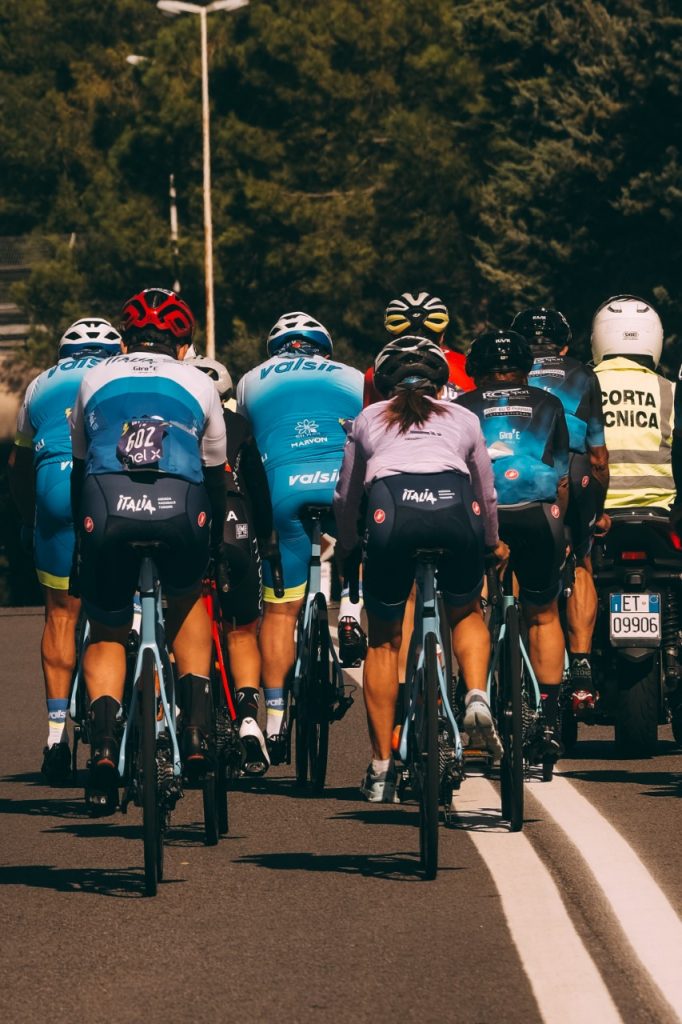 The very last one – but it doesn’t count, because the final sprint is only for captains and vice captains: Photo: Mauro Bellucci, WAM Lab. 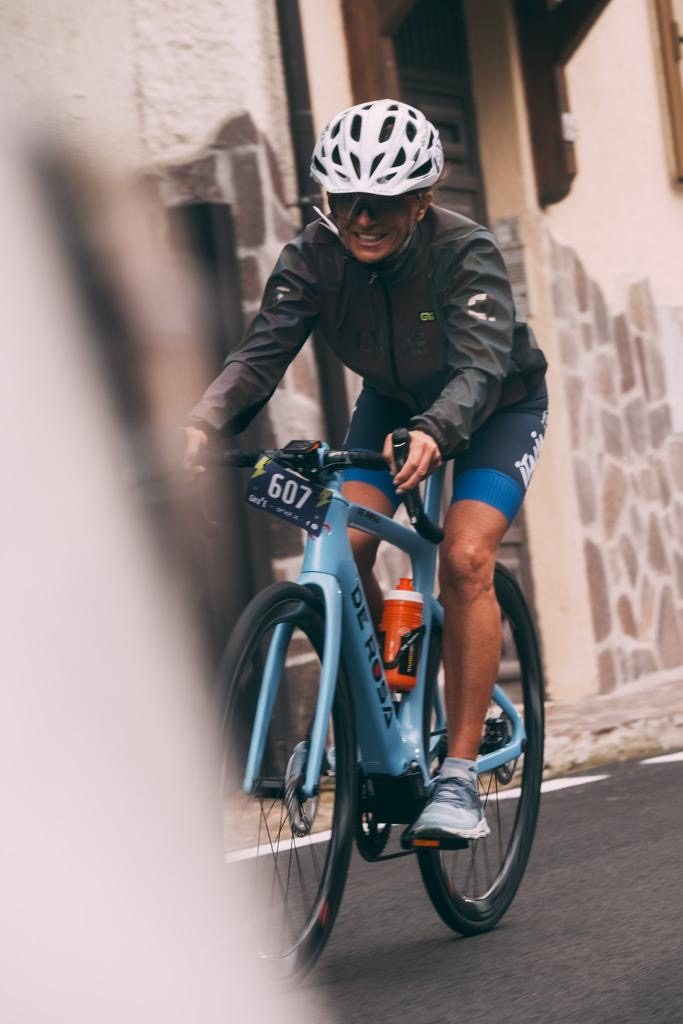 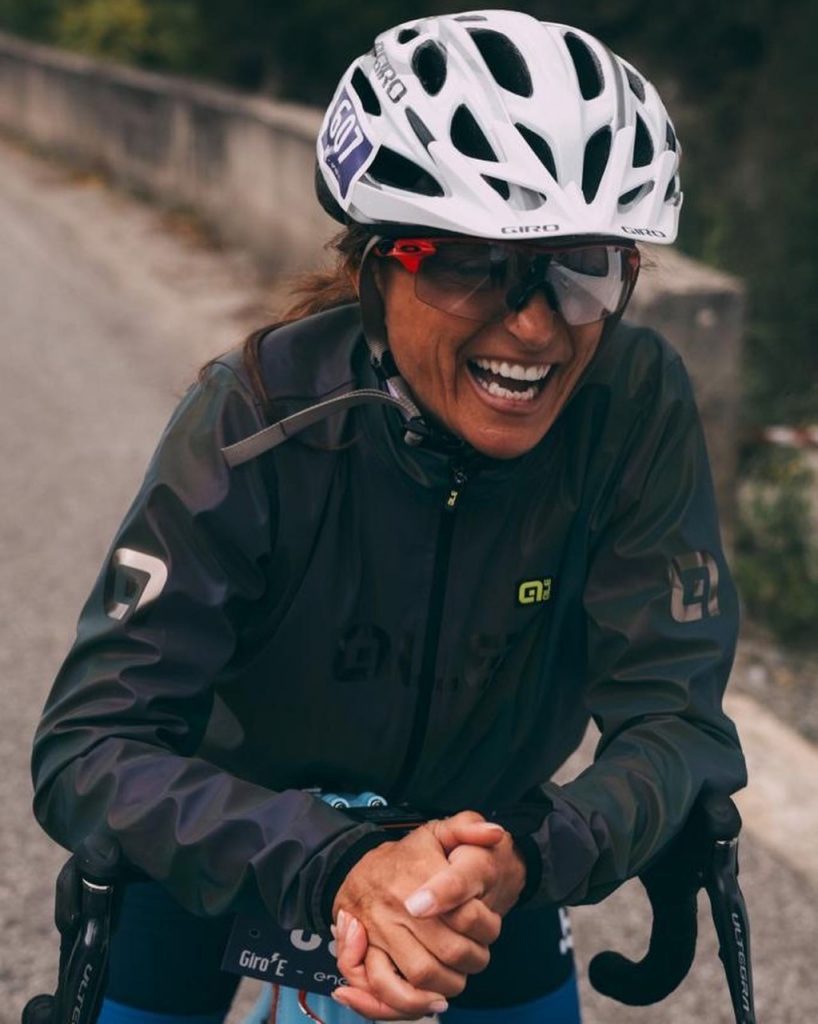 I borrowed my captain’s jacket (and I am thinking of stealing it). Photo: Mauro Bellucci, WAM Lab. 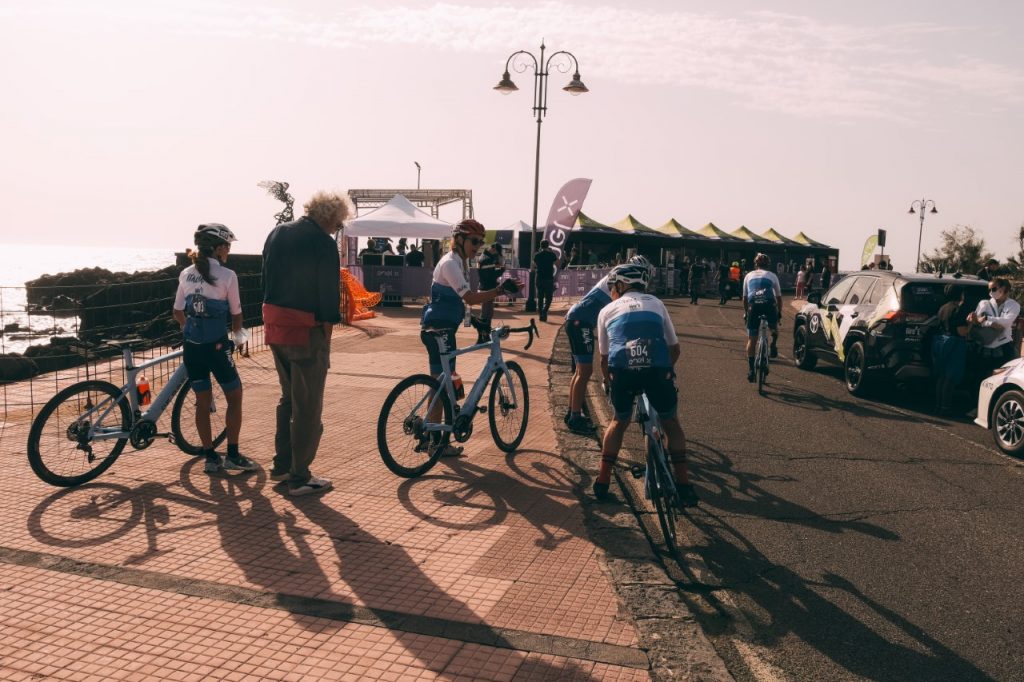 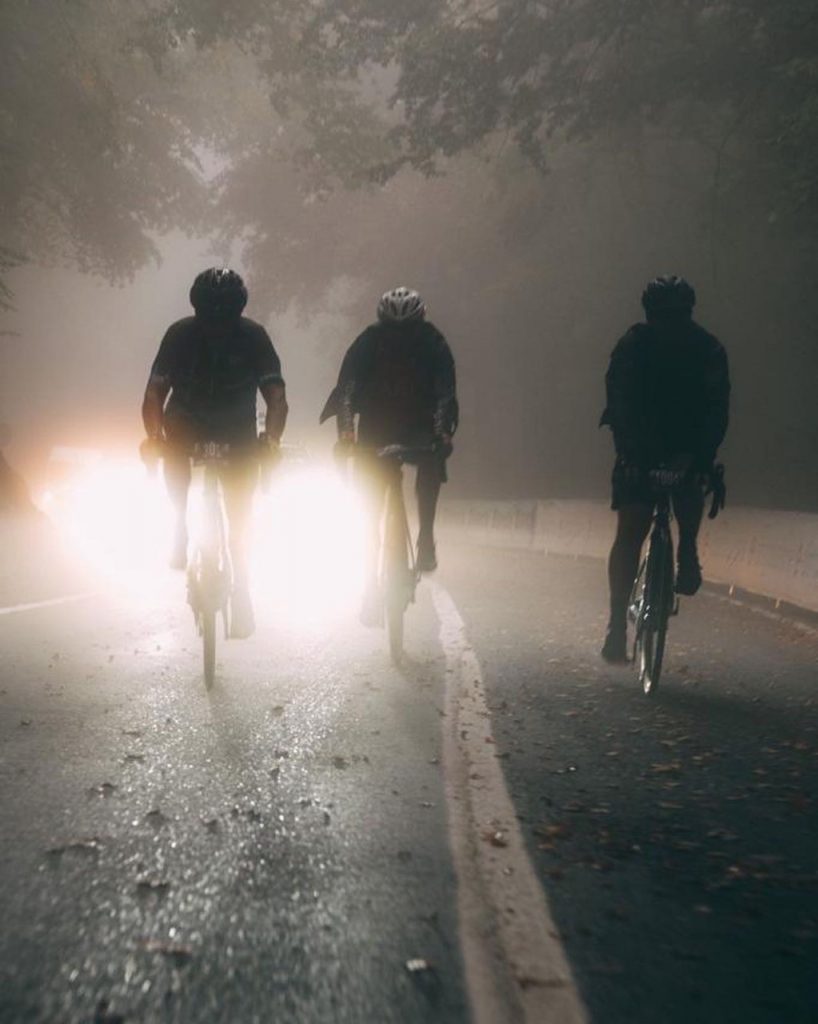 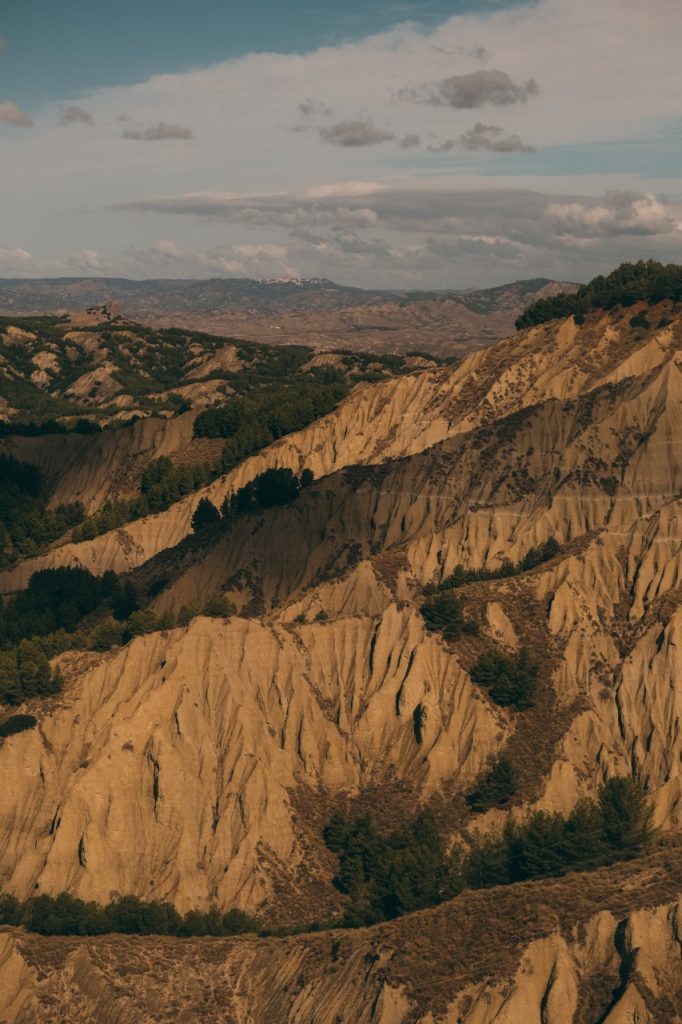 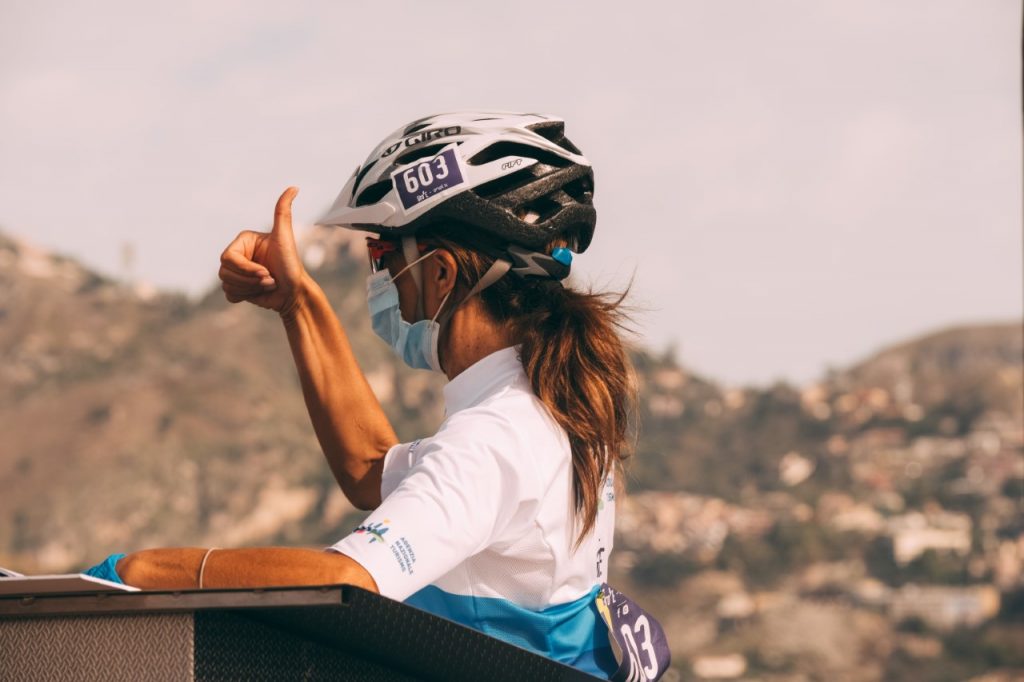 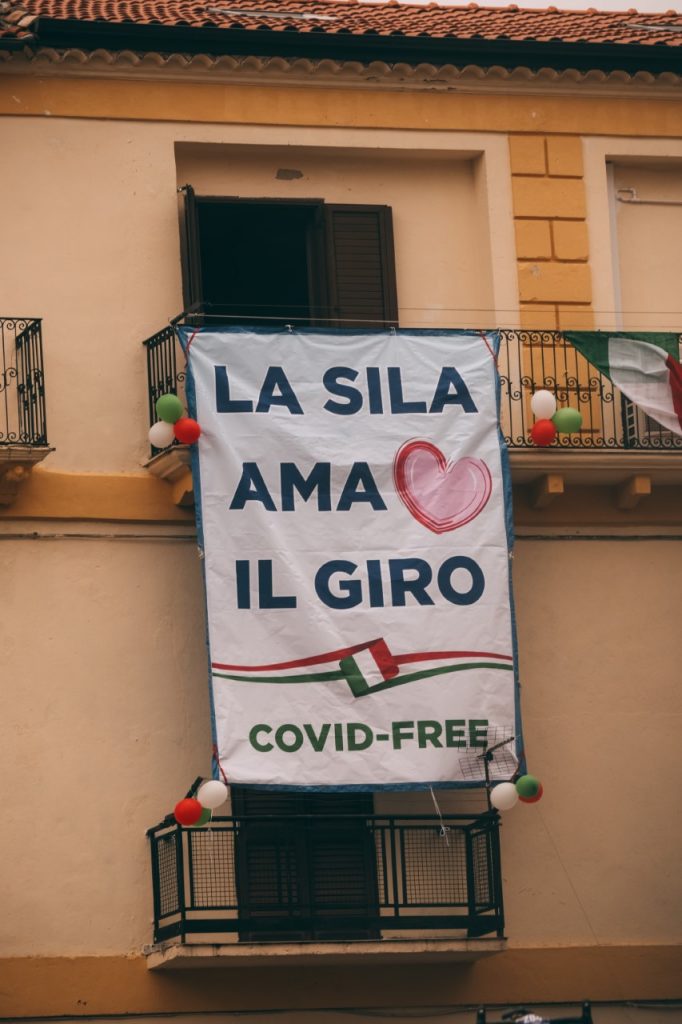 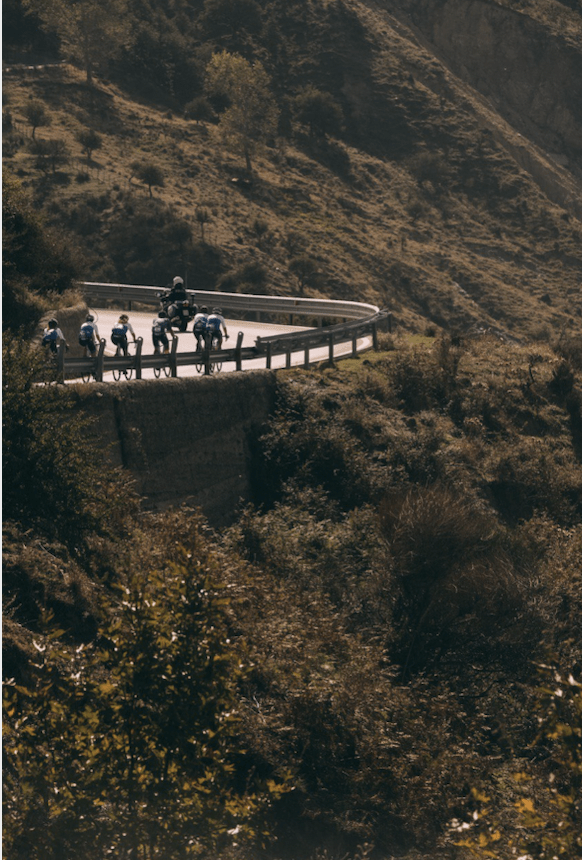 One of the gorgeous roads of the Giro. Photo: Mauro Bellucci, WAM Lab. 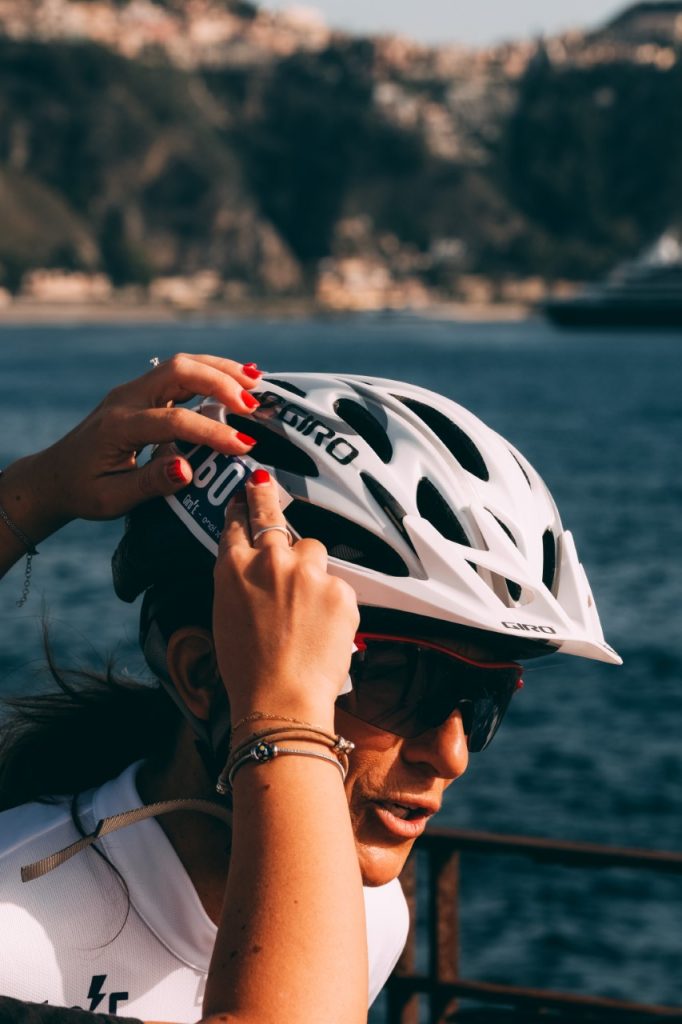 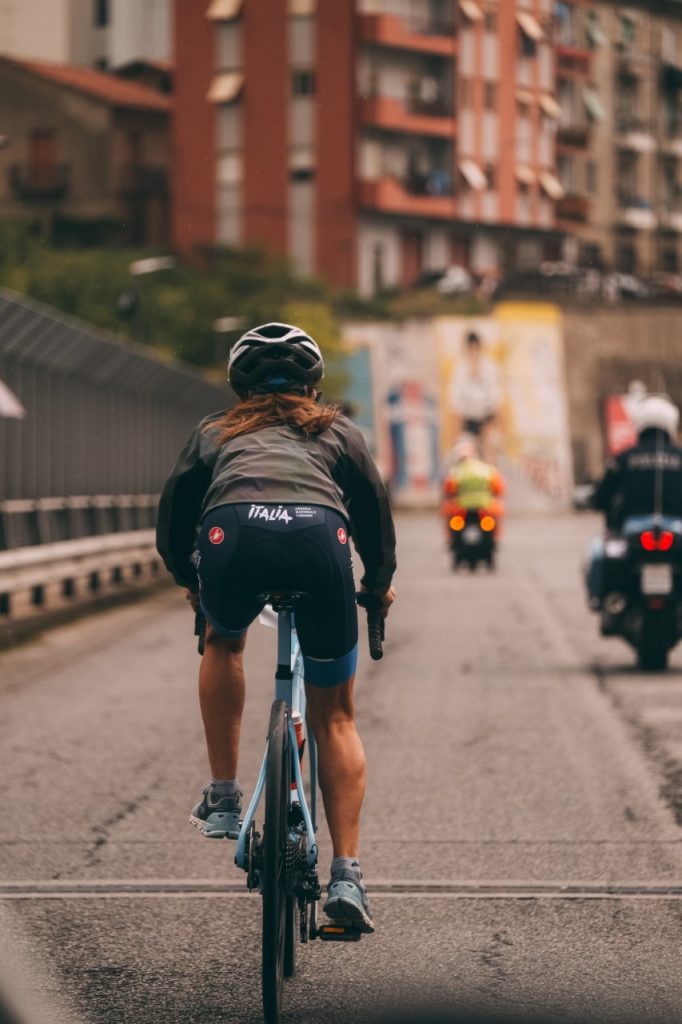 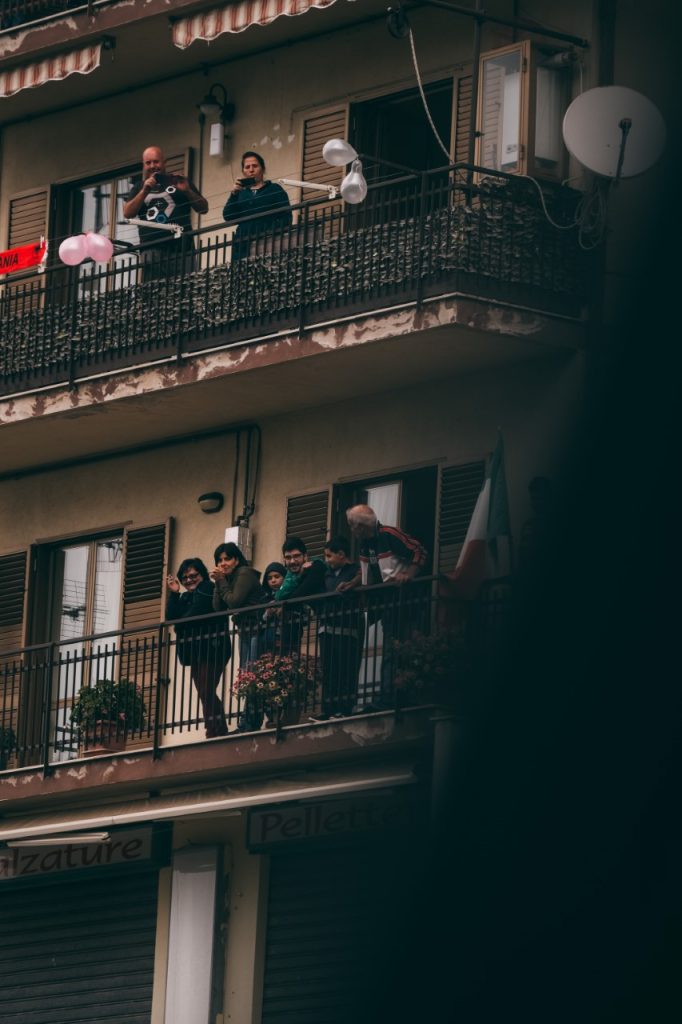 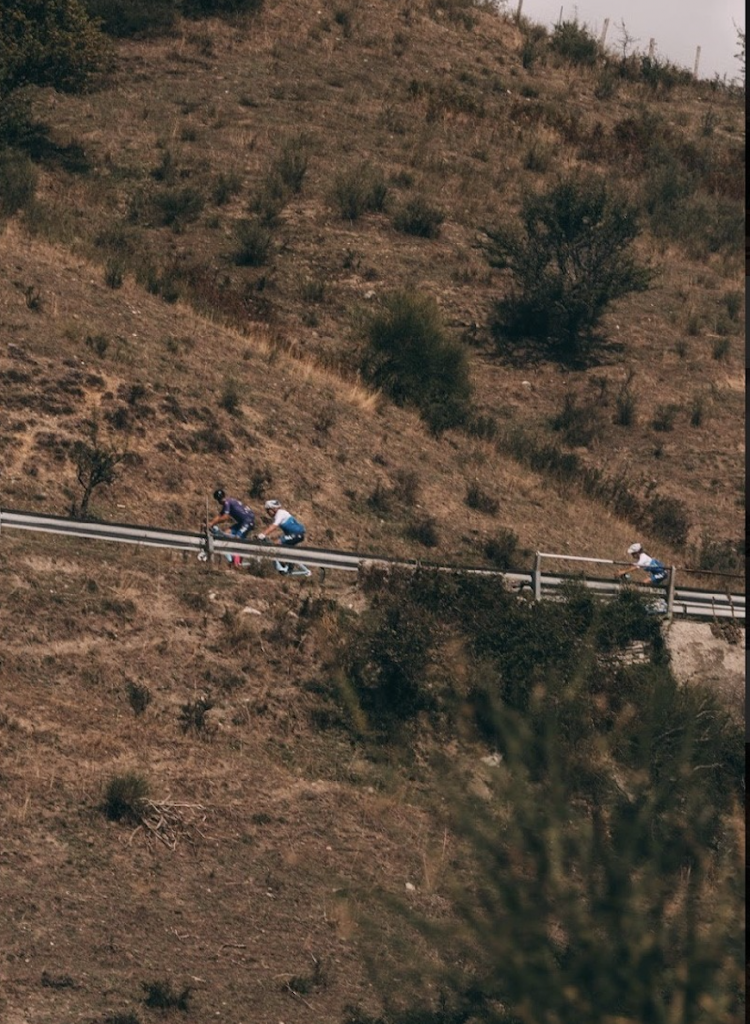 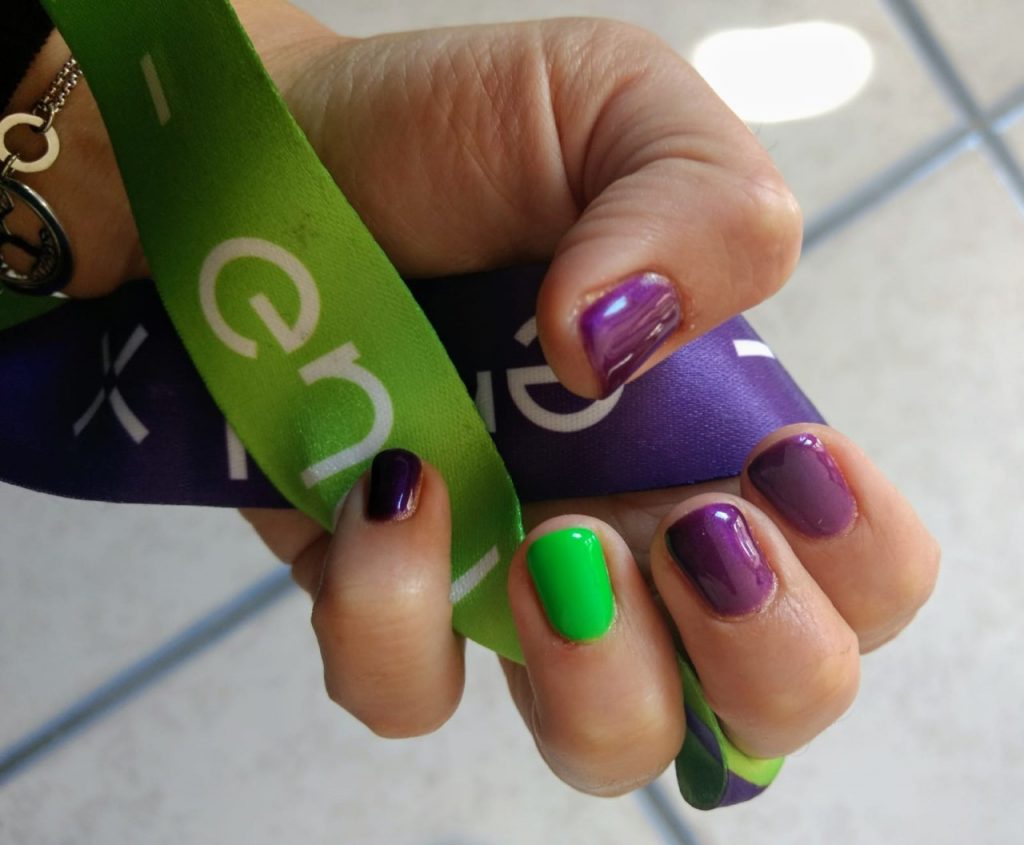 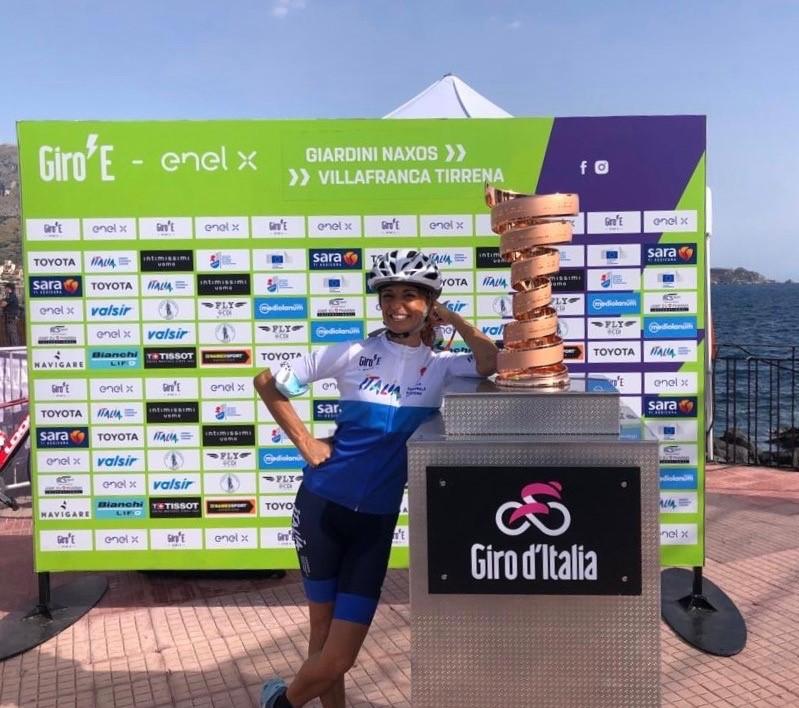 Holding on to the trophy. 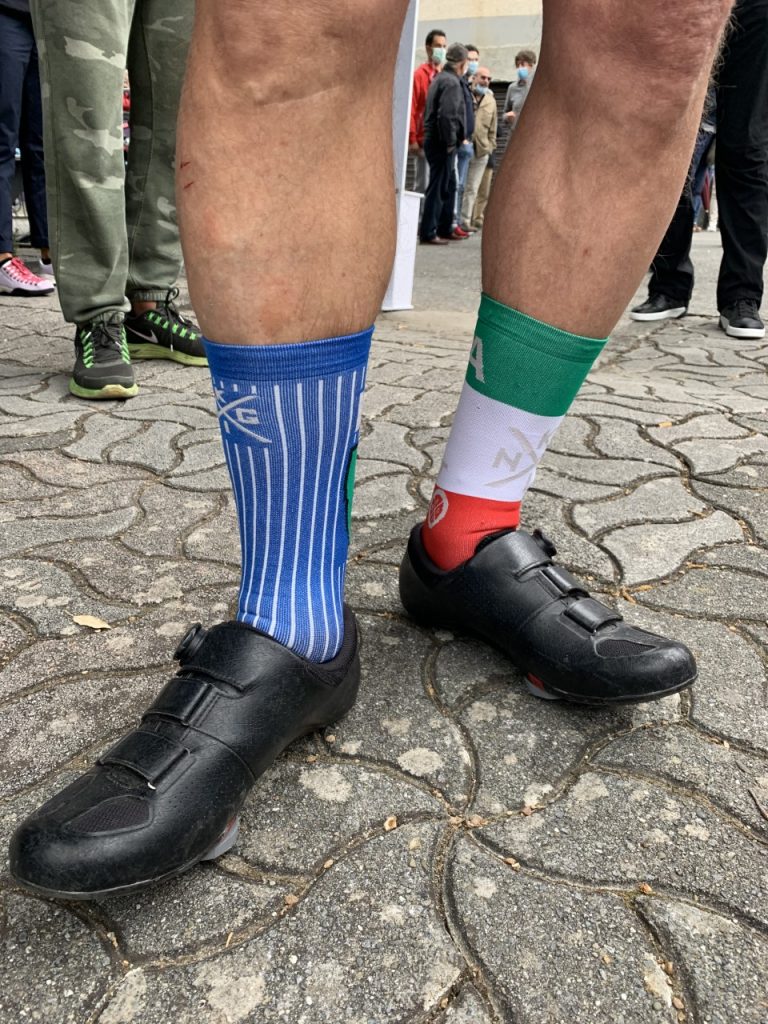 Franz socks – photographed with my phone. 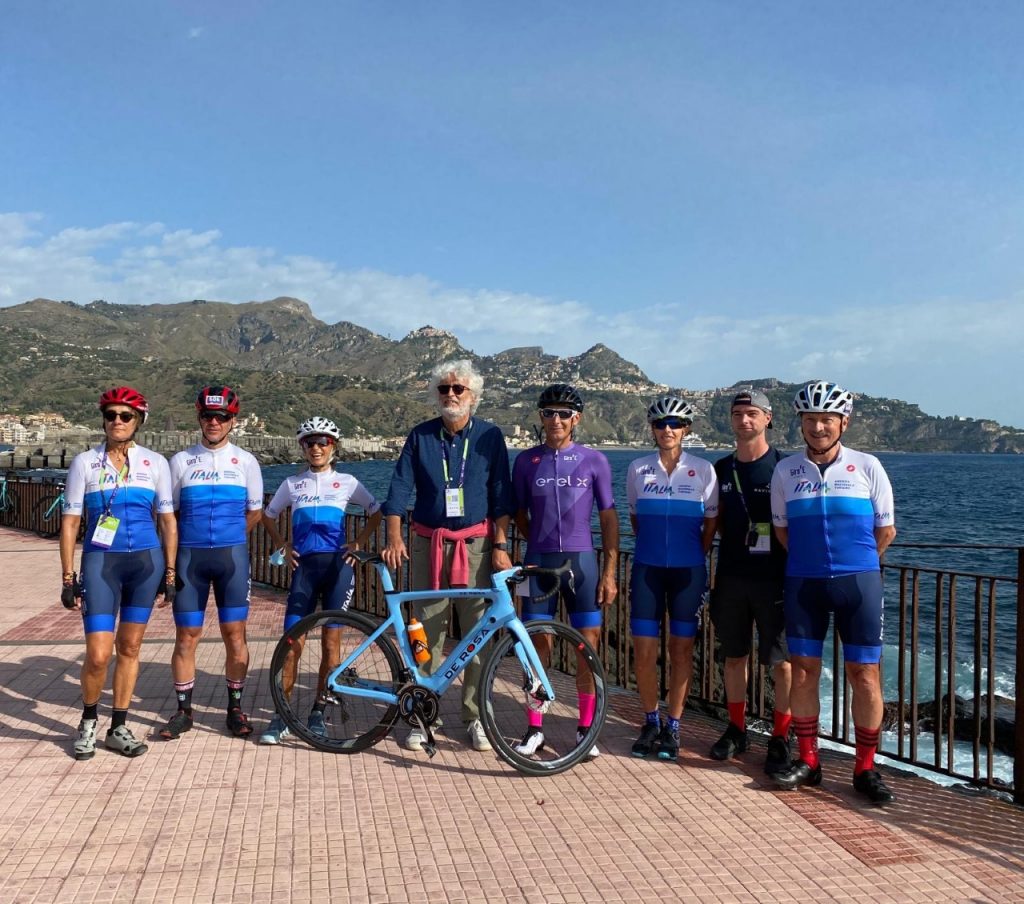