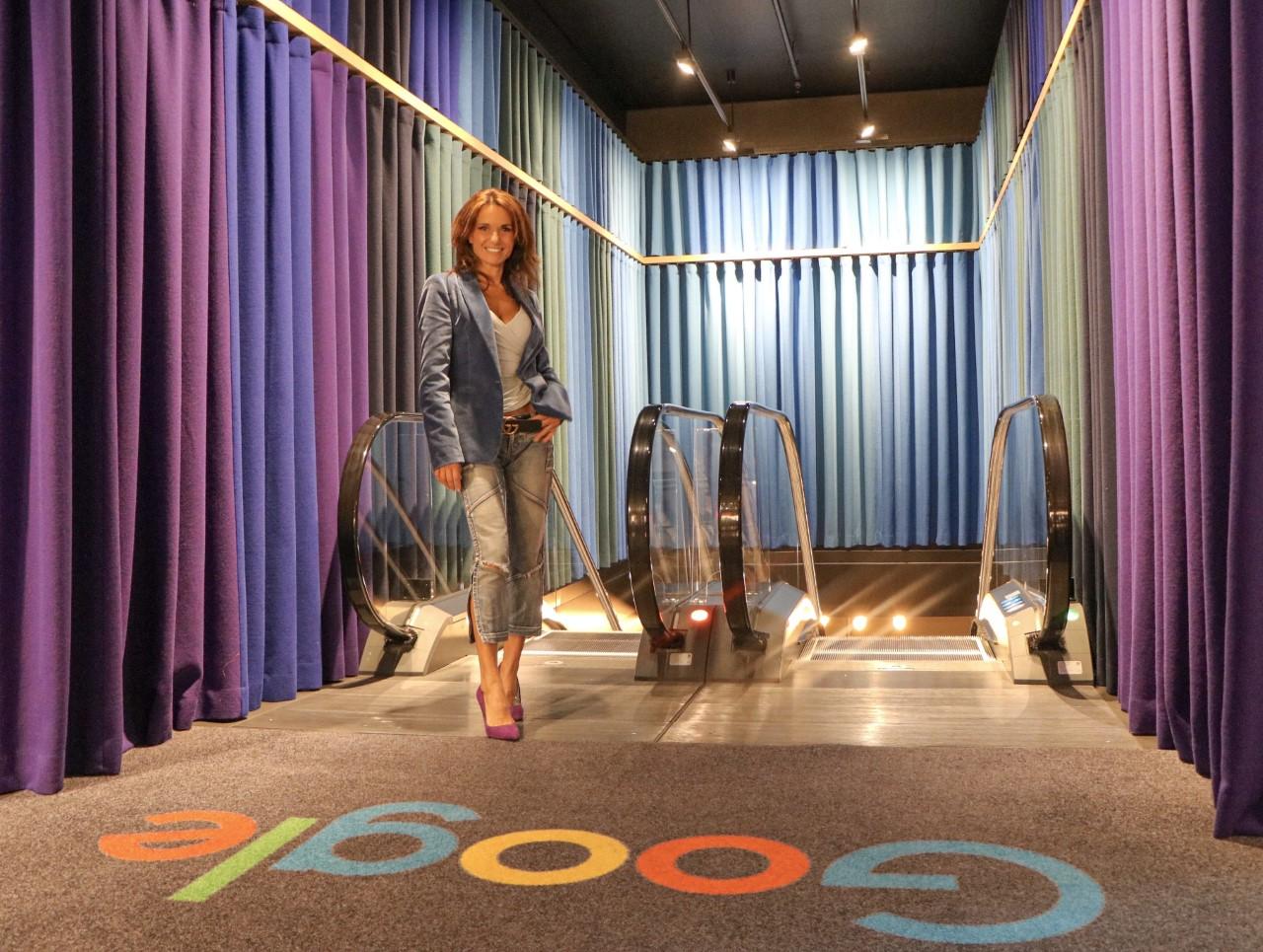 The answer is:  Asperger syndrome. Albert Einstein had it, Greta Thunberg has it, Google did a conference about it (and the whole autism spectrum). Don’t stop reading – you might learn some surprising things. Here’s what struck me during the conference I attended last week at the Google headquarters in Zurich. 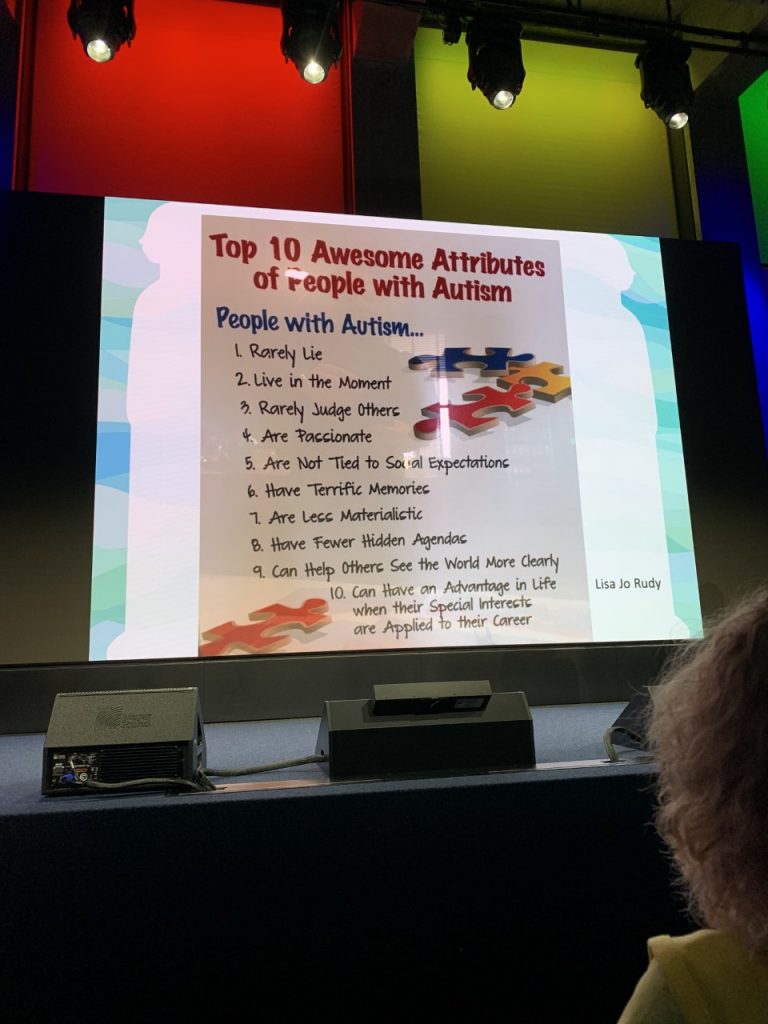 10 Awesome things about people with autism

We could see it immediately, from her walk: Magda Mostafa (PhD, Associate Professor of Design at University in Cairo), a tiny and energetic brunette, is very passionate about her job.

She started by asking the audience: who of you has attended elementary school?

Everybody raised their hands.

And is anybody below 1.80 mt. tall? If you are, please put your hand down

Hands go down. She goes on asking:

Does anybody here wears glasses or contact lenses? If so,  hand down please

Has anybody been pregnant? Hand down please

Has anybody here ever had a bone fracture – leg or arm? Hands down in that case, please

…and so on. Until there are only two white men left, out of a 350 people audience.

These are the men for whom schools are designed today.

So who is normal?

This little exercise got me thinking.

Google Glasses are Back – And How!

The second lecture was by Ned Sahin, (PhD at Harvard in cognitive neurosciences), also young and very passionate about his job.

Ned had the idea of using Google glasses (lighter, smaller, and soon becoming a contact lens) and augmented reality to educate kids in the autism spectrum to look at people in their eyes, understand their emotions, look at new places to “rehearse” them…in short, for education.

Kids, for example, see a sad face and have to tilt their heads to answer the question: “what is she feeling?”. If they answer correctly, they get points and prizes. Unlike traditional gaming, though, the idea isn’t to make them addictive, but to make the game less interesting by progressing, so the final action will be…leaving the glasses and going to real life.

Twenty minutes a day of these techniques improve these children’s life/posture/reactions dramatically.

If you want to get emotional, watch this video and watch a mum’s reaction to her child watching her for the first time, or go to http://www.brain-power.com/. 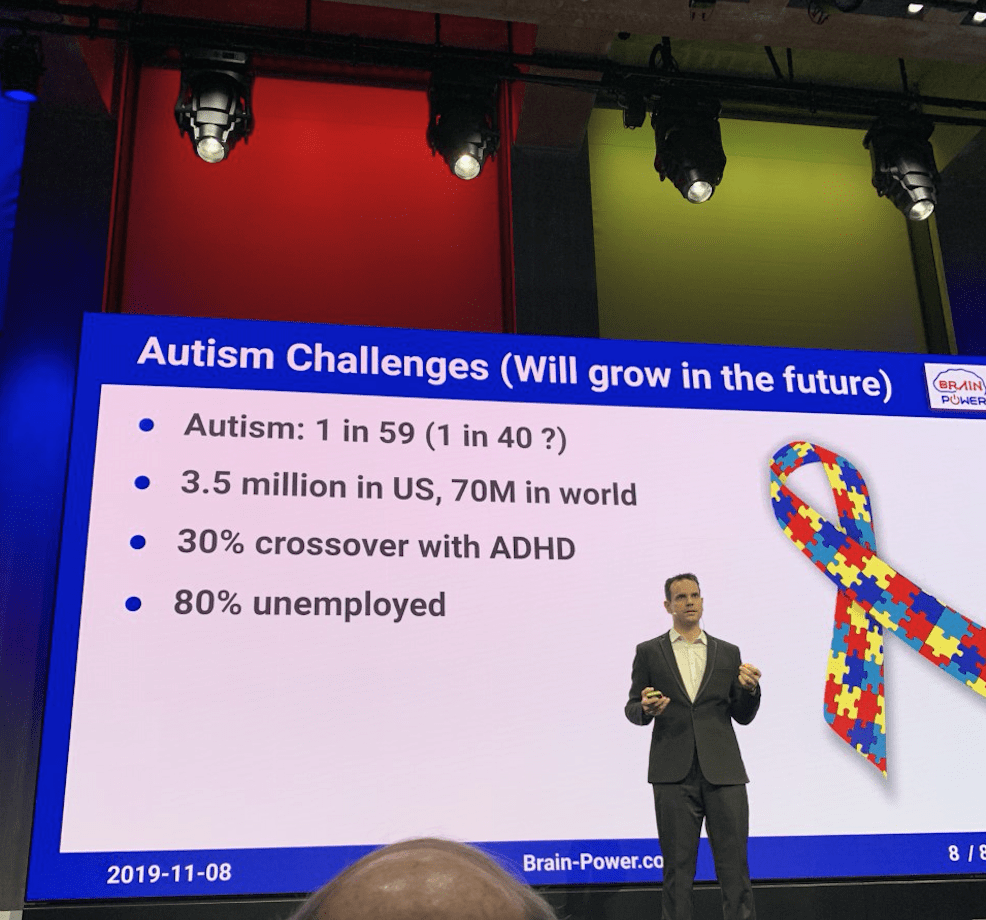 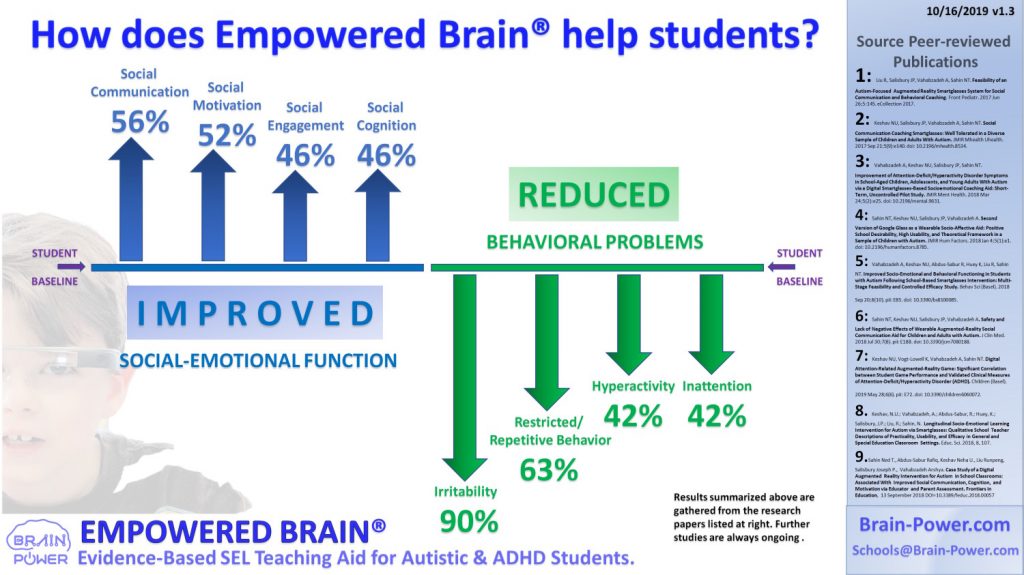 Best Architecture in the world? Guess where… in Egypt

Let’s go back to Magda Mostafa, the architect who asked people to raise – or, better, lower – their hands.

After realising there is no design for autistic children (and that design, today, is aimed at an ideal, perfect audience), she started to develop the concept of universal, inclusive design.

Her system is called ASPECTSS (acronym for Acoustics, Spacial sequencing, Escape, Compartmentalisation, Transition, Sensory Zoning, Safety) and you can check some examples on her website.

The big surprise that came with it, when applied to school and public spaces in Egypt, was that everybody loved it. Many areas of newly designed schools, for example, started to be used even more than planned, and in different ways. And by everybody.

School “pods” – quiet spaces to be alone and enjoy calm – started to become a prize instead of good marks. Children started to call another child they didn’t know, in there, to talk and socialise in a quiet environment.

Once more, I had a lot to think about. 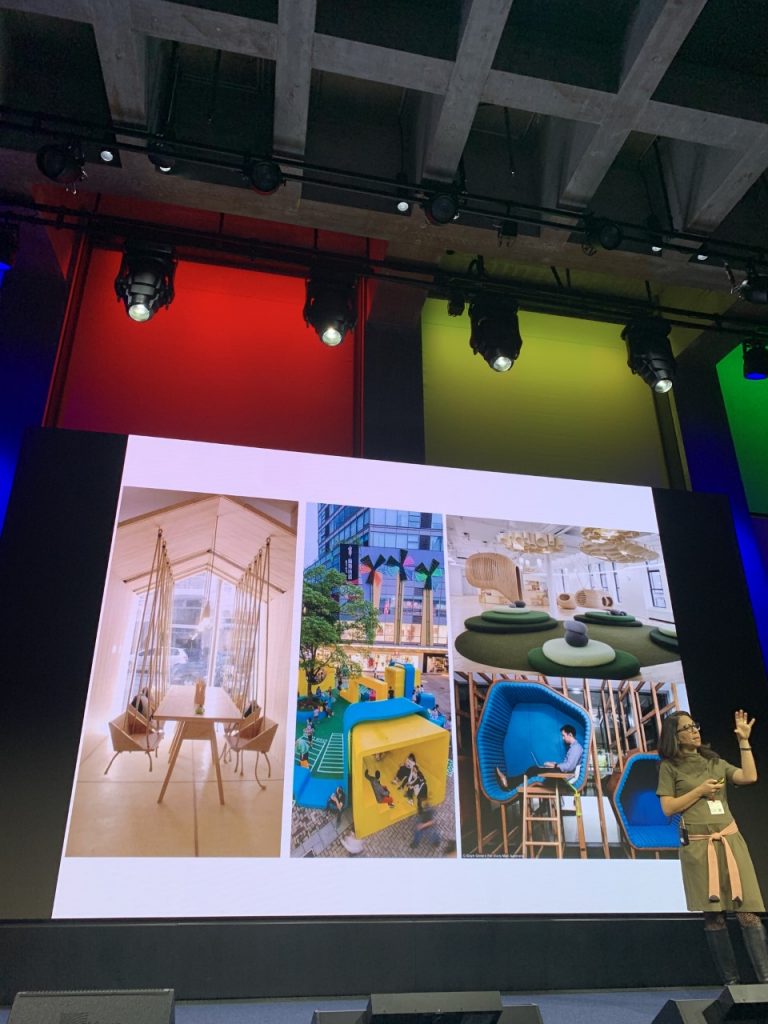 During the break, I learnt another little thing. I had never been in a Google office so I was very amused when I went to their toilets. Everybody was taking a picture while queueing up, and had a smile on their face. Politically correct design can be fun! 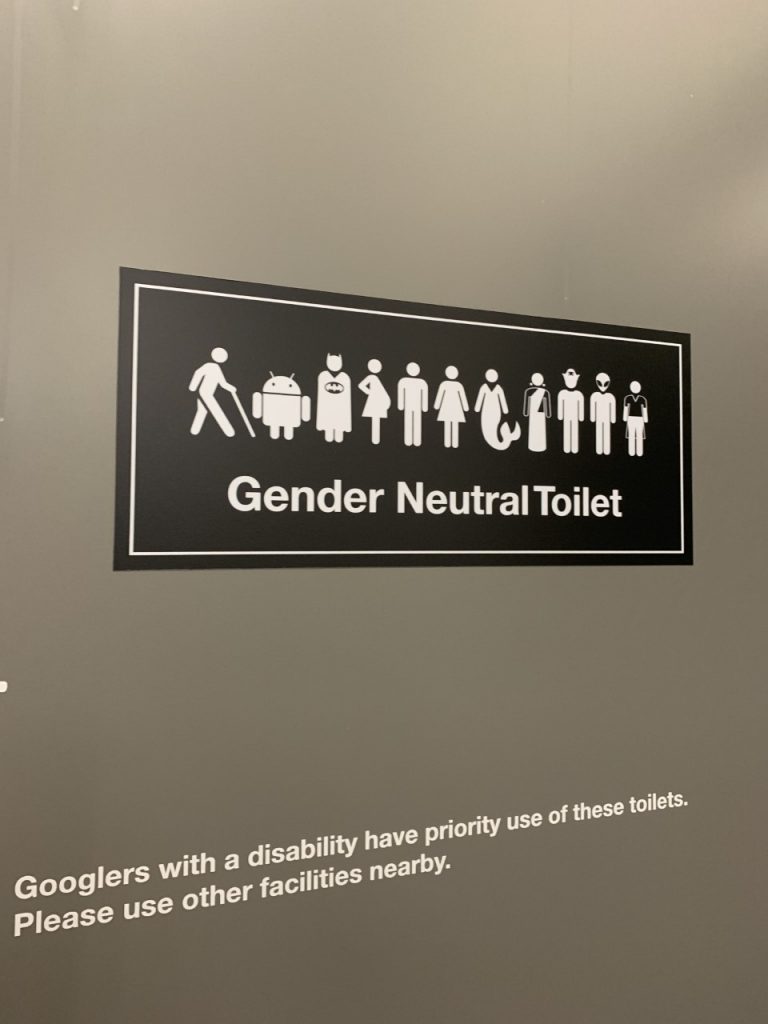 Asperger’s is not a disease. It’s a way of being. There is no cure, nor is there a need for one

The last speech I heard was by Barry M.Prizant, Ph.D., Adjunct Professor Brown University, Providence, RI. And wow. He opened my eyes –  I truly related to many of the things he said, because someone very close to me is in the spectrum, but I had never heard much about this issue.

There is a quiet revolution going on in autism

Behaviour in autism has been misunderstood/dehumanized. Deep interests and strength have been referred to as “obsessive”. Behaviour has been judged inappropriate without asking: why?

Think about people like Albert Einstein, Greta Thunberg, Kodi Lee, for example. Are they brilliant and talented, “despite” their autism, or “due”, at least in part, to their autism?

When you think that 70 million people in the world are affected (yes, you read it right: 70 million), 80% of them are unemployed, and 90% of them have no romantic partner, well…you might wonder if it’s the case to start understanding why they behave that way, and also helping them to use their strengths, instead of judging.

And this is something we should do with everybody – autism or not.

A lot of food for thought for me!

Thank you Ariane Tavakol of Discoveroutloud for sending me the invitation and for spending a really insightful morning together. 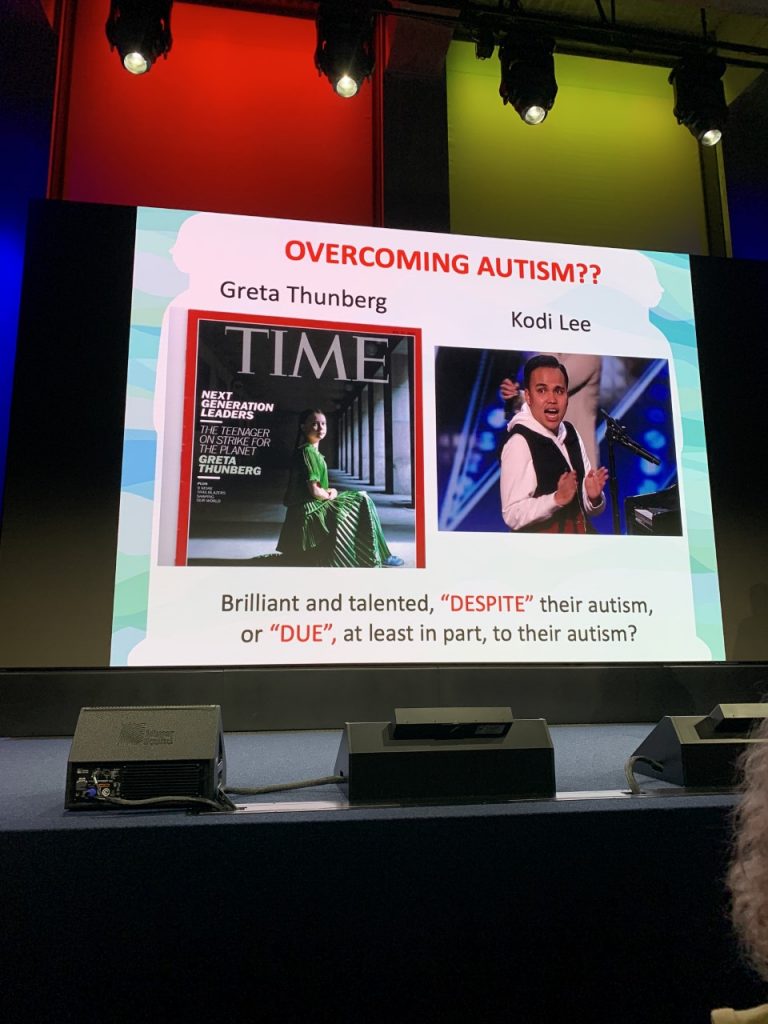 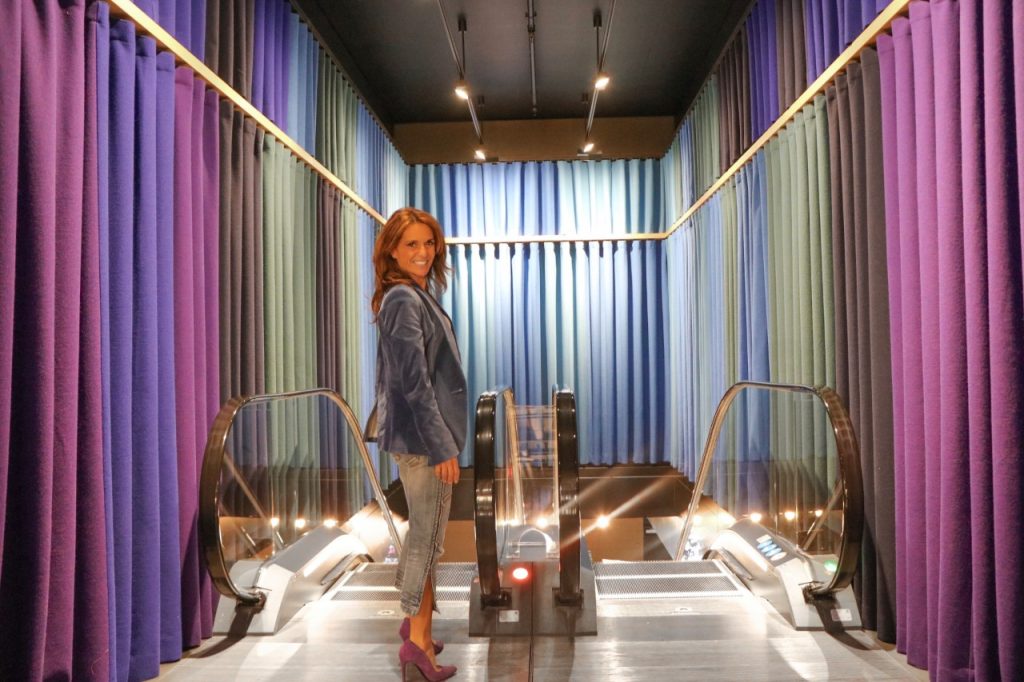