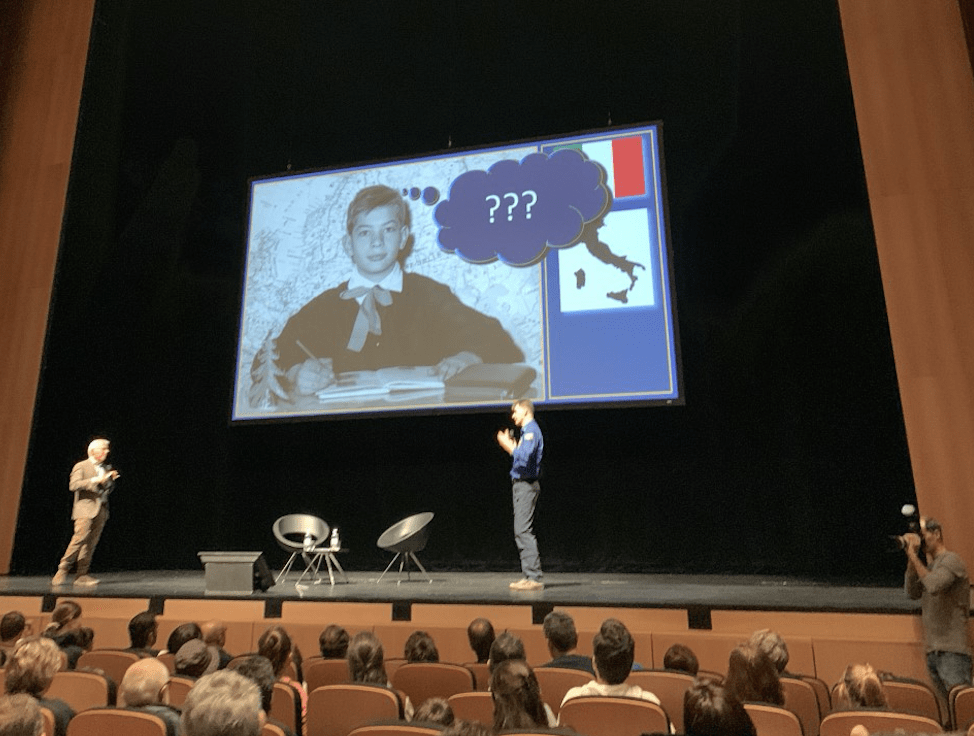 When the audience of a conference is mostly made by children, you have to think twice about its content: kids are honest, and, if they don’t find it interesting, they are probably going to show you.

But if the speaker is Paolo Nespoli, astronaut and engineer at ESA (European Space Agency)  and – bonus point – Italian, you can be sure that they’ll love it. And I loved it too. Last week in Lugano, where the conference took place, I laughed and shed some tears while listening to Paolo’s words. Let me try to explain why.

Too Big A Dream

Paolo started his speech showing the childhood picture you see here. When he was at primary school, his dream was to become an astronaut. But he thought it was impossible and ended up in the military service, half-heartedly wondering about his future. There, he met author and journalist Oriana Fallaci, who, at the time, was very famous in Italy (and whom, by the way, I admired too – I read all her books).

Oriana asked him why he thought he couldn’t follow his dream.

I’m too old, I don’t have a degree and I can’t speak English

She must have found the right words or attitude to push him, because nine years later he became an astronaut. Today he holds the Italian record for time spent in space, and impressive 313 days.

When you think you’re going to a hit a wall, try anyway. You might find out that most walls are actually made of cardboard

Paolo explained to the children, while walking on stage with big steps pretending to hit walls and see them fall.

I started to feel like one of the kids in the audience, totally fascinated by his story. 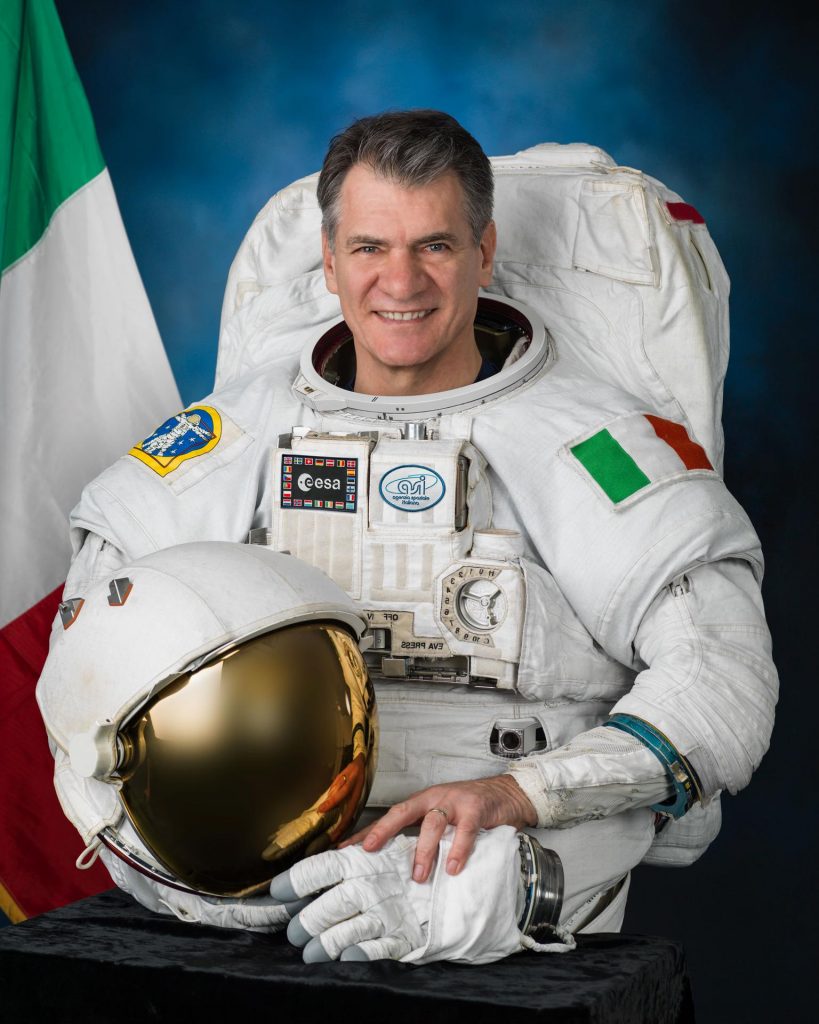 So why did they choose you, what made you different?

Someone from the audience asked.

I tried the selection three times, and they wouldn’t pick me. On the fourth try, the examiner asked me about my hobbies, and I answered I loved to take pictures. We ended up talking about photography for more than twenty minutes, so I thought we were wasting time and that, as usual, they wouldn’t be interested in me.  “If they only asked me a  third degree equation”, I thought…. “I’m so good at it! That way I would pass this test!”  But, they didn’t ask and yet, incredibly, this time I was chosen.  I guess what they wanted was a person with big passions. Everybody there knew the technical answers. What made the difference was how passionate you were.

I was very intrigued.

Surprises of the Heart

The speech went on with a lot of examples of what an astronaut does on a standard day in space. Many details about the lack of gravity amused children and grown ups alike.

How does an astronaut drink, eat, catches flying IPads or tools, in space? Paolo had innumerable stories about this topic.

The one I particularly liked was about a video shot by NASA while he carefully manouvred to catch the ATV (Automated Transfer Vehicle). He concentrated very hard and managed to finish the job perfectly.

However, when he saw himself filmed, he realised he was strangely floating up and down.  He thought he was perfectly still!?

He later understood that this was the result of his heartbeat: he was so scared to make a mistake, that his heart pumped harder, and pushed his whole body in the same direction. 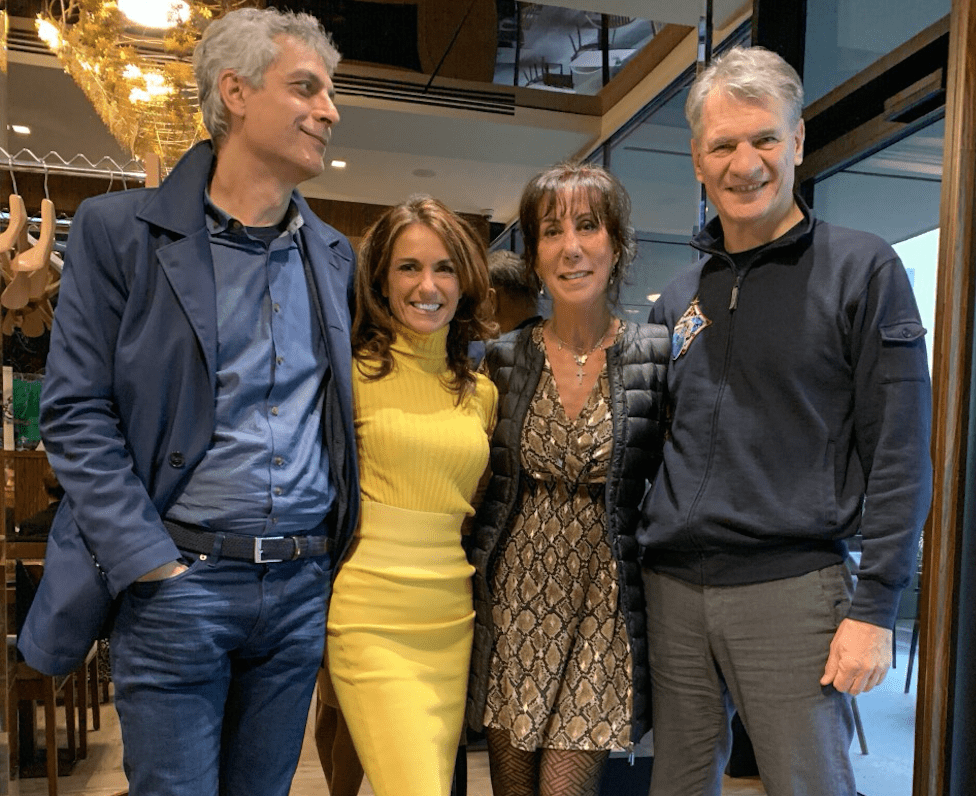 The International Space Station circles the earth in about 92 minutes. This is because it travels at the speed of 8 km per second (yes, you read it right: per second. That is a mind boggling 28’000 km per hour).

The distance from earth is about 400 km, so an astronaut up there sees the earth like…well, almost like we see it on a Google map! He can take pictures and see the shapes of continents and even cities,  and many more details I didn’t know about and that really surprised me for their beauty and precision.

Paolo, as already said, is a keen photographer. During his – not much – free time in space, he took thousands of pictures and put them together in the video below.

While showing it to us on the big screen, he named some of the places that quickly passed in front of our eyes: the Mecca, an Aurora Borealis, the pink sands of the Namibian Desert, the turquoise waters of the Bahamas… one gorgeous image after the other. I started to become emotional.

The borders we worry so much about …

…are not visible from space. What is visible from there is the precious layer around the earth: the atmosphere. Maybe we should think about taking better care of it, instead.

He concluded, while the music and images came to an end.

At that point, my eyes filled up with tears. Only very shortly! I sniveled for a moment, sighed and picked myself up again. An adult can’t be too emotional in front of children, can she?

It was a lot of food for thought, for me, and an eye-opening afternoon.

Here is the NASA video made with Paolo’s (and two more astronauts) photos. Who would have known, that an engineer could be so inspiring! (smile)