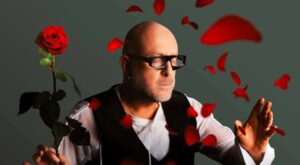 Events Zurich Mario Biondi – Why The Italian Gringo Might Turn You i... 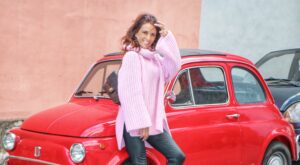 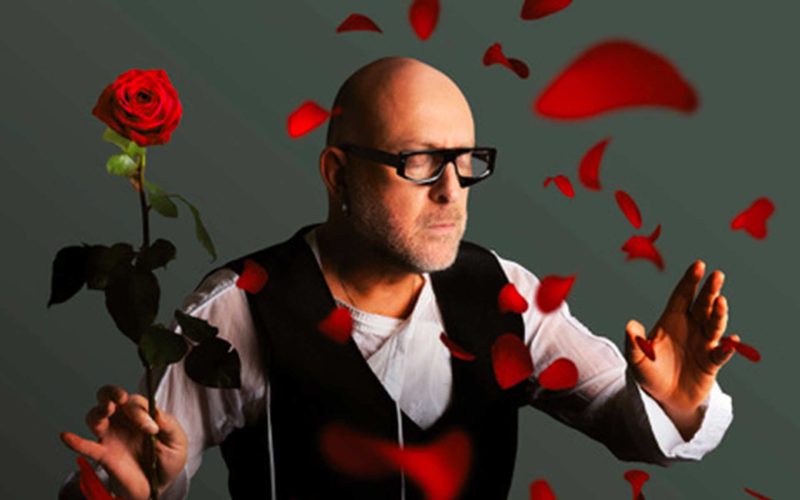 Interviewing best selling Italian vocalist Mario Biondi is a dream job: he’s first of all a great listener. And that’s good, because I am very nervous about meeting him.

Backstage at his recent Zurich concert, the Romantic Tour, he should be the one who’s tensed, given the fact that he’s going to sing live in the next hour. Surrounded by a whirlwind of technicians and musicians, Mario lets me into his dressing room. Everybody has something to tell him and he calmly listens to all of them. Then his legendary voice greets me and for a moment, like Proust’s madeleine, it catapults me to a completely different world. That voice! It triggers my involuntary memory. Hours of spectacular music pass through my mind in a flash. I am a fan, I mean it. My bag falls on the floor, I get down to catch it, and when I look at him, smiling from above and trying to help me, I can’t help but noticing he looks even taller than his two meters (six foot something).

Mario: All good?
He asks.

Beatrice: Hi Mario, thank you so much for this interview, I am a bit of a groupie of yours, you know…I really need to place myself in the front row tonight, to see the concert well…

I say too fast, to try to justify my nervousness.

Mario: No problem, let’s go for it.

He answers with a smile.

Beatrice: Let’s start with the word “Romantic“. You chose it as a title for your latest album and for this tour around Europe. Is it still a problem, for a man today, admitting he is a romantic?

Mario: I wouldn’t even say it’s a man’s issue – in fact, one risks to be uncool by calling himself or herself romantic, whatever the gender. I never cared much about it, and now even less. Ageing is interesting because it shows you who you really are, and I am hopelessly romantic. Romantic in love, as one can see from the fact that I managed to generate nine kids! (laughs), and romantic in life. For example, I believe we can solve problems by talking things through.  I believe in humans, in their goodness. That we do have a chance to save this crazy world.

Mario: I am an Aquarius and my rising sign is Aquarius. And I used to listen to ” The Age of Aquarius” in the 70s, it made me think. Brotherhood exists and I try to cultivate it. The first song, “The Creator Has a Master Plan“, is a bit of a preview of this whole idea. People should be aware of their strength, so they don’t need to start a war to show it.

Beatrice: Wait a minute: you anticipated my next question! I meant to ask you if that song starts a specific order to the lineup of the album songs, like a story with a beginning, a central plot and an end?

Mario (Laughing): My lawyer always complains about that. That while he’s trying to think of how to perfectly phrase a question, I annoy him by already answering it…

Beatrice (also laughing): Then tell me about the songs sequence. After an intense beginning with songs like “Fino all’Ultimo Respiro“, written by Maurizio Fabrizio, the central part arrives.

Mario: Think about the titles. In the middle there are “Loneliness” and “Prisoner“. Life (and love, relationships, friendships, etc) also means suffering. I had my share of it, like everybody. When I look back at how I was in my twenties, I must say I was excellent at making mistakes. Too much ardour, enthusiasm, instinct. But today I have learnt to love that young Mario. He had good intentions and also got many things right. It’s about accepting the hard stuff too. It made you who you are.

Beatrice: The last song of the album  is one of my all time favourites, by Lucio Battisti, “Take It as It Comes“.

Mario: I have been singing it for thirty years. I’ts perhaps the only song of mine I listen to again and again, because often I can’t stand myself. I don’t want to sound like a cliche, but singing some songs hurts, so after recording I avoid listening to them, I need to detach. I need time and distance to appreciate them.

Beatrice: Is this the case for “Tu Malatia” too?

Mario: Yes, it’s a song written by my father. I lost my father when I was 25 years old, and it wasn’t easy. I thought I would never sing it. Then my manager convinced me to give it a try. Now I listen to it like…I’m casually passing by, if you know what I mean. I almost observe myself from outside. It still hurts. In general I prefer to share my joys, not my sorrows. I also love challenges and don’t shy away, but I don’t want to compete to be the best or the coolest. I can accept my weaknesses.

Beatrice: I think one needs to be quite confident, to admit these things.

Mario: I don’t know, but one should judge people from facts, not from words. As a father, if you preach something, you should first behave that way. You can’t tell your children to behave well at the table, then sit down for dinner picking your nose.

Beatrice: Talking about children – as you said yourself, you have nine, congratulations! –  did they like the video you made for “Romantic song”, in the middle of hundred of thousands balloons?

Mario. For “Romantic song”, I immediately imagined two dancers and a sensual dance. I called choreographer Luca Tomassini and he proposed the balloon museum as a location. I loved it. When I was a kid, I once got lost inside a park in Reggio Emilia. My parents found me again thanks to the balloon tied to my wrist. I am sure that balloon is the reason why I am two meters tall now!

Beatrice: Then I buy one myself too…

Mario: One of my daughters, Marica, is 1.81 tall and a professional model. Quite a contrast with her mother – she is petite like you.

Beatrice: Let me ask you something more about your music. You did a lot of duets and collaborations: with Ray Charles, Al Jarreau, Chaka Khan, Earth Wind & Fire, James Taylor, Burt Bacharach and many others. Do you ever feel annoyed about sharing your glory with them?

Mario: No way! I told you I am anyway better trained at losing, than at winning…But seriously, I am so lucky I could meet almost everybody I admired and listened to as a kid. I grew up listening to Al Jarreau’s songs again and again, my father wanted to kick me out of the house for that. Having the chance to work with him and even become a friend was such a privilege. In the case of “Bluey”of Incognito we met and immediately recognised each other. He saw me and said: “You must be the Italian loose cannon!”

Mario: So sorry (laughs). Anyway, Bluey gave me Chaka Kahn’s contact and then I met Al Jarreau in Malta. I was in awe, such a role model for me. My idol. He simply said: let’s do something together, man.

Beatrice: And do you still feel like a loose cannon or you finally managed to fit in? This was the question I meant to ask.

Mario (shaking his head and laughing): I never fit in. I was a blonde, blue-eyed, tall Sicilian. Always different. But musically speaking, I like the idea of being an outsider. When I started to sing in English, you have no idea of how many people in the music industry told me that an Italian singing in English would never get anywhere.

Beatrice: A bit of a gringo….Funny to hear that, after all the gold and multi platinum records you’ve sold. Well, it’s almost time for you to go on stage. What’s the atmosphere here, on tour, with the band?

Mario: We have it good together, not only while working. But it does change, depending on the concert and location.  I always prepare a program with a playlist, and then never really follow it strictly…that would be too cold and impersonal.

Beatrice: This sounds very Italian, isn’t that confusing for the band?

Mario: Well, they know me, and I can’t live in a cage. Anything too structured makes me unease.

Beatrice: Yes, you must love change. You have interpreted a lot of music genres: soul, R&B, Jazz, tribute songs, Italian and Brazilian music…you’re a very Italian and a very International artist.

Mario: Pay one, get one free!

Beatrice: (Laughing) Let me finish! You do so many different things, but your style is steady and unique…I don’t think it’s only because of your famous low, deep voice.

Mario: Some of my musicians like to wind me up and ask: “What shall we play today? Which key? Which language? Oh well, what does it matter, you anyway Mariobiondize everything…”

Beatrice: You simply do it your way, don’t you?

Mario: Hey, I study too! But yes, I am in my element and use my instinct. Sometimes, before choosing how to interpret a song, I might remain quiet for two days, reflecting upon it. But I try not to show it too much, it’s an intimate process. I strive to find the essence, the soul of what I’m going to perform. I’m like a good baker, who needs to understand how much yeast to use for the perfect leavening. I can hear a song and sing it two hours later. But I also want to do it to the best of my ability. And you know what? If it is my own song, it’s always the most difficult one to execute.

Mario: I need to limit my ego to the minimum, with nine kids and such a sharp crew! But I do enjoy when people around me are happy.

Beatrice: And I see how you do that, because I am much more relaxed now, compared to the start of the interview. Thank you for putting me so at ease.

A technician comes in and starts placing microphones on him.

Mario: From the next minute onwards, I won’t be able to hear you anymore… ciao!

And he walks on stage.

I also get out and manage to squeeze into first row. The band lightens up the room and Mario’s voice, long-awaited, starts the magic. People cheer and let themselves go. The music warms up every heart, we sing along, time flies. I have never seen a Swiss audience having such a ball, people actually communicate, move to the beat, feel the great energy, it’s like a party.

Using Bluey’s words, Mario created a new standard, an evergreen style of Italian music, because songs like “This Is What You Are” will be listened to for the next 100 years.

I go out of the concert in such a good mood, that I keep smiling for two days after. What a night. We need art, we need beauty, we need to warm up our hearts. Mario can really sing to our souls, mixing the fun with the intense feeling that being happy is, after all, the meaning of life. I might give it a try and become hopelessly romantic… 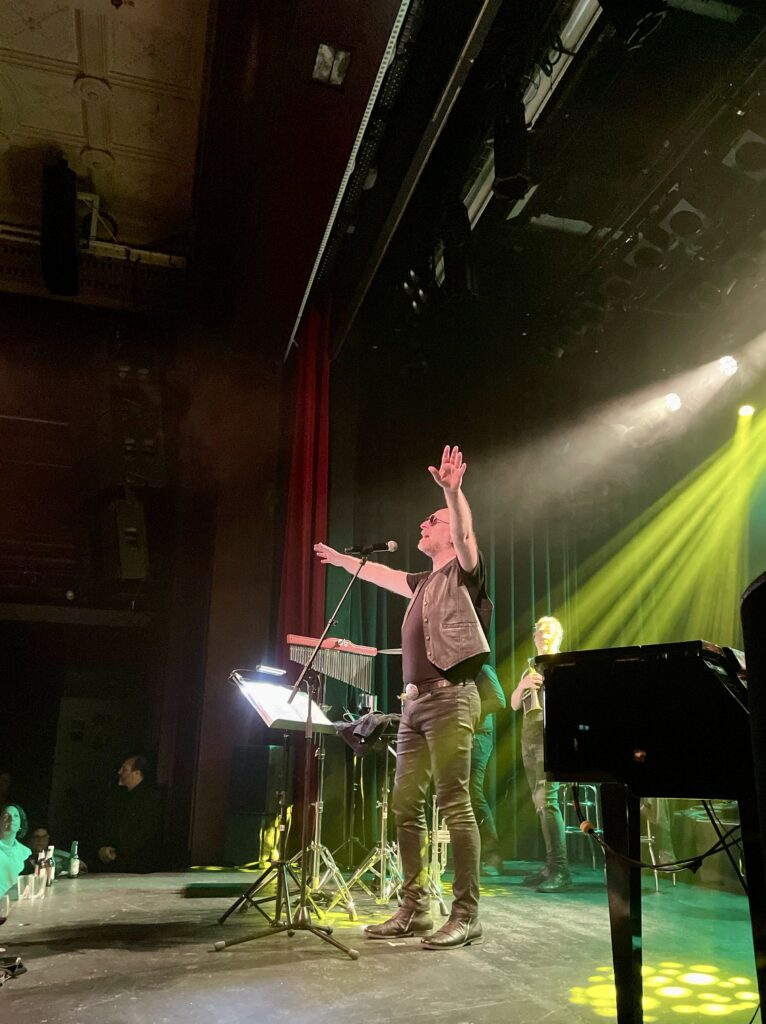 Mario Biondi during his Zurich concert

November 25, 2021 Would They Choose You To Become An Astronaut? The Answer Might Surprise You
December 26, 2021 11 Things You Didn’t Know About Egypt
August 1, 2021 Going to New York with Paige is like going to the Vatican with the Virgin Mary